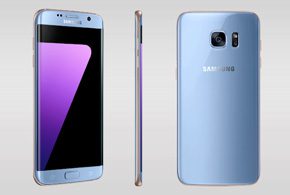 If I ran Samsung, I certainly would be focusing like mad right now on earning back the trust of customers after the total recall of the company’s flagship Galaxy Note7 smartphones in October due to more than 100 reports of battery fires and explosions around the world.

If I ran Samsung, I would be issuing a steady stream of detailed press releases with information about how our ongoing investigation into the battery problems was revealing—finally—the true and actual cause of the fires that doomed a smartphone model and caused my company to essentially watch some $6 billion in operating profits vanish due to the fiasco.

Instead, what did Samsung announce on Nov. 1 in a corporate press release?

A new Coral Blue color (pictured) for its Galaxy S7 Edge smartphones. I’m not making this up.

Samsung, just a couple weeks after a business disaster of epic proportions, continues to avoid revealing more details about what caused the failures that led to the recall of some 2.5 million Note7 phones.

Honestly, that’s what I want to hear about right now. Not about a new smartphone color.

Samsung needs to be much more open and much more direct and report every development into its investigation, no matter how small, as they figure it out.

Why should there be such scrutiny?

Because the company didn’t do its research the first time when the Note7 battery fires first cropped up. Instead, Samsung quickly said it had an answer to the issues by switching battery vendors. That, as we now know, was the wrong move and led to continuing problems with devices that contained the new batteries as well. By not openly sharing information earlier, the company failed to properly identify the root cause of the fires and turned its first recall into an example of how to kill a product and harm your credibility with customers in just a few short weeks.

Samsung still apparently doesn’t know or hasn’t reported exactly what caused the Note7 fires. The company told eWEEK earlier that it is continuing to look for the cause of the problems.

The Note7 debuted in late August and quickly was the source of reports about battery fires and explosions. Samsung addressed those initial reports by investigating the devices that had fires and starting its own global recall, and then in September cooperated with regulators at the U.S. Consumer Product Safety Commission when the agency issued a government recall of the phones.

With all of this still ongoing, Samsung needs to focus, not on more phone colors, but on explaining what happened with the Note7 and what the company is doing to make sure it NEVER happens again.

This is about honesty, openness and restoring credibility, not about style and pushing more important matters out of the spotlight.

This is about forgetting about color choices and styling now and focusing on making batteries that don’t catch fire.

That’s what I’d be doing if I ran Samsung today.