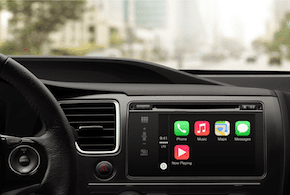 Apple’s CarPlay intro was a dud, according to Roger Lanctot, associate director of Strategy Analytics’ Global Automotive Practice. His March 12 blog post on the announcement is worth checking out if you missed it.

Apple scrapped a plan for a Geneva Apple Store event, did without the fanfare that would usually accompany a “market-changing event” and, instead, went for full-court-press on the floor of the Geneva Motor Show. Once the press days were over, not an Apple staffer was to be found.

The feeling they left behind, wrote Lanctot, was one of “an opportunity missed.”

He continued, “BMW summed up the sentiments of automotive industry leaders in noting that it was perfectly happy with its existing Apple integration (BMW Apps) and [saw] no need to shift to the new platform. No doubt, Ford, GM, Chrysler and others shared this sentiment.”

While Mercedes does intend to port its existing Apple integration to CarPlay, few others committed to a 2014 launch of the technology and the CarPlay excitement “fizzled.”

Furthering that fizzle, Lanctot went on, was a lack of news from Apple, about plans to invest in brand-defining advertising, along the lines of what Microsoft has done with the Ford SYNC. Worse was Apple’s “failure” to do more to mitigate driver distraction or offer accident assistance—though the latter could be coming.

Apple filed a patent March 6 for “Mobile Emergency Attack and Failsafe Detection,” Apple Insider first reported. The patent application explains that the device could call emergency services in an instance where the device isn’t interacted with for a certain amount of time.

In another example: “If an accelerometer contained within the device detects a sudden shock, then the device similarly can automatically place a telephone call to emergency services,” states the application. “After detecting a probable emergency situation, the mobile device can responsively and continuously emit a loud audible alarm through the device’s speakers at maximum volume, regardless of the device’s current silence or volume settings, in an effort to attract from other people who may be nearby.”

Perhaps a new feature for the iPhone 6?

In a March 14 article, The New York Times talked about the influx of gesture-based technology headed for automobiles. (Taking a hand off the wheel to gesture to the car to advance to the next song, or turn up the volume on the radio, is safer, the thinking goes, than taking one’s eyes off the road for a quick moment.)

Apple last year purchased PrimeSense, the company whose technology Microsoft licensed for early Kinect Xbox 360 sensors, the report pointed out. Further, in recent months, Apple has advertised for a “Car Experience Engineer” and a gesture-recognition engineer.

By all indicators—Apple’s included—CarPlay, or at least Apple’s play for the in-car space, is going to get a lot more interesting. When fanfare is really called for, Apple has no problem creating it.