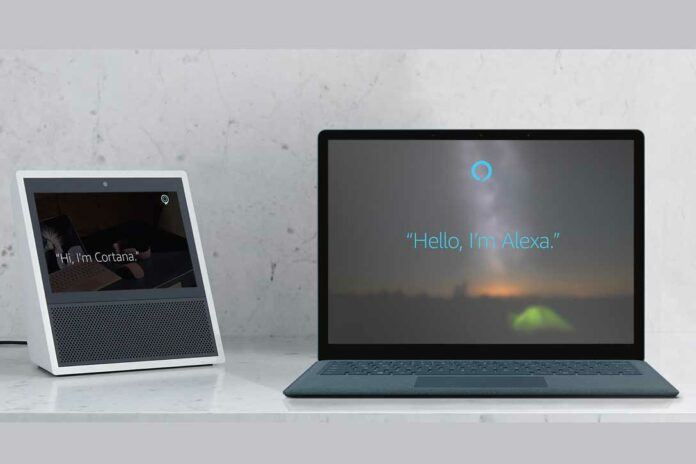 Although voice-activated virtual assistants are present in millions of devices and have plenty of overlap in terms of functionality and third-party support, currently Cortana, Alexa, Google Now and Apple Siri exist as self-contained ecosystems.

When its introduced this fall, Alexa-Cortana collaboration will allow Windows 10 users to access Alexa’s skills by issuing voice commands to Cortana, Windows 10’s built-in virtual assistant. Alexa, meanwhile, will help Amazon Echo owners keep track of appointments, reminders and other information gathered by the ever-watchful Cortana throughout the day.

Opening an AI communication channel between Alexa and Cortana not only expands the utility provided by each platform, according to experts it also enriches the burgeoning conversational AI and voice commerce markets as a whole.

“Voice and zero UI [user interface] interactions are currently limited by the capabilities programmed into each model,” said Stephanie Trunzo, chief digital officer and chief operating officer at digital strategy specialist PointSource, in email remarks sent to eWEEK. “Alexa enables a set of defined skills for specific use cases and Cortana is designed to be a voice interaction interface” for finding and retrieving information.

Together, Cortana and Alexa will push the boundaries of what voice-enabled AI can do beyond what each platform can do alone.

“Combining capabilities allows additive use case patterns,” Trunzo continued. “When the systems connect multi-variable flows, and enable learning and iteration, only then will we see the real power of cognitive intelligence in voice interface.”

Getting AI assistants on the same page may also have a significant impact on the ecommerce space.

Nearly a quarter (24 percent) of consumers have a voice-controlled device, according to Walker Sands’ recent Future of Retail Study. “Another 20 percent are planning to make a purchase over the next year. Amazon in particular has been a strong player in the space and already owns the majority of the market,” said the study’s co-author Erin Jordan, account Director and lead of the Walker Sands retail technology practice.

Like online shopping and mobile commerce in the past, today’s consumers are growing increasingly more comfortable making purchases using voice commands. “On the commerce side, nearly 1 in 5 consumers (19 percent) have made a voice-controlled purchase in the past year, and nearly a third report that they’ll be likely to do so in the next year,” added Jordan.

For both companies, each approaching the consumer from different perspectives, the partnership opens up new opportunities, Jordan said. “Amazon has shown with its acquisition of Whole Foods that it’s not afraid to make big and different moves, and it will be interesting to see how this partnership unfolds and brings even more of a push toward the voice-controlled commerce world,” she said.

“Alexa and Microsoft coming together on voice-controlled devices represents the importance of this technology to tech giants in the space,” added Jordan.