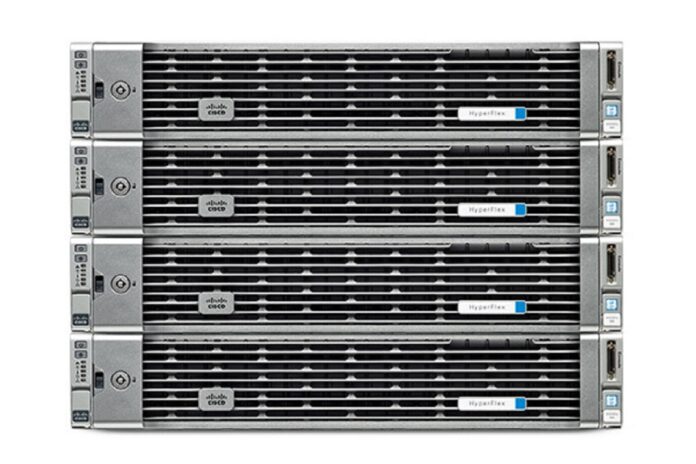 Cisco System officials almost two years ago jumped into the burgeoning hyperconverged infrastructure market with the introduction of the HyperFlex system that included the company’s Unified Computing Systems and Nexus networking switches and software acquired from startup Springpath as foundational elements. Since then, Cisco has added enhancements to Hyperflex on an almost quarterly basis and last year bought Springpath.

Cisco continued this strategy Jan. 25 with the introduction of new features that are helping to fuel officials’ drive to expand HyperFlex’s role beyond hyperconverged infrastructure and into making it a platform that organizations can use in their move to the cloud.

The enhancements to HyperFlex include support for Microsoft’s Hyper-V hypervisor and for application containers along with the ability to deploy clusters across multiple data centers.

“We look at HyperFlex as a platform,” Todd Brannon, director of product marketing, told eWEEK. “With HyperFlex, you can run any app on any cloud at any scale.”

The introduction of the latest enhancements in HyperFlex 3.0 comes a day after the company announced it is buying Skyport Systems, a private company that makes hyperconverged system that are managed via the cloud. Cisco had been an investor in Skyport, whose employees will become part of Cisco’s data center and networking unit.

The hyperconverged infrastructure space continues to grow rapidly. In the third quarter 2017, sales jumped 68 percent over the same period a year earlier, hitting $1 billion in sales, according to IDC analysts. Hyperconverged revenues accounted for a third of all converged system revenues. IDC said that Dell and Nutanix were the top two vendors in the space, with market shares at 30.6 percent and 20.7 percent, respectively. Cisco was third, with 6.6 percent of the market.

Cisco officials have said enterprises are quickly moving to a multi-cloud world, where they will run their businesses on multiple public and private cloud platforms So they will need infrastructure and technologies that will enable them to easily move and manage their applications and data.

They also will need to be able to run their legacy workloads in these new distributed environments as well as embrace emerging technologies such as containers as part of larger IT modernization efforts. Cisco cited a IDC survey from last year that showed that 94 percent of respondents plan to use multiple clouds and 87 percent have begun to develop a hybrid cloud strategy.

The vendor has more than 2,500 customers using HyperFlex, which tightly integrates hardware and software into a single appliance. With UCS, Cisco was targeting large enterprises with complex IT environments.

HyperFlex is enabling Cisco to extend its reach into midmarket businesses with 500 to 1,500 employees and smaller infrastructure demands. HyperFlex also is finding its way out to the edge of the network, Brannon said.

Vijay Venugopal, Cisco’s product marketing manager for HyperFlex, told eWEEK that midmarket businesses make up a growing amount of HyperFlex’s customer base, particularly over the last few quarters and among businesses with all-flash storage environments. In addition, about 30 percent of HyperFlex customers weren’t UCS customers, an indication that HyperFlex is bringing new customers into the fold.

The enhancements in the HyperFlex 3.0 software include support for Hyper-V, adding to Cisco’s embrace of VMware’s ESXi. The expanded support broadens the virtualized workloads that customers can run on hyperconverged systems. It also supports containers, which are becoming widely used for workload modernization efforts as well as for using microservices to deploy new applications.

Cisco’s FlexVolume driver enables persistent storage for containers managed via the Kubernetes orchestration tool, which will make it easier for businesses to develop and deploy cloud-native applications on the hyperconverged infrastructure solution.

To help businesses more easily move and monitor workloads across multiple public and private clouds, Cisco is offering AppDynamics with HyperFlex to give customers a single place to manage their hybrid applications, and Workload Optimization Manager for HyperFlex to automate the analysis that will help determine where workloads will be placed.

CloudCenter for HyperFlex is designed for workload lifecycle management across multiple clouds and simplifying the deployment and management of virtual machines (VMs), containers and applications in private clouds.

Cisco officials also targeted scalability in their enhancements. HyperFlex can now scale from eight to 64 nodes (up from 32 nodes), with greater resiliency coming from the use of availability zones, all of which will mean higher VM density. Stretched clusters will enable customers to spread clusters across two sites to meet data protection and high availability demands. The company is recommending stretching clusters up to 100 kilometers.

In addition, Intersight, the vendor’s IT operations management product, now supports HyperFlex Cloud Deployment, which officials said simplifies deployment and management to remote locations and will give customers greater visibility into their environments.