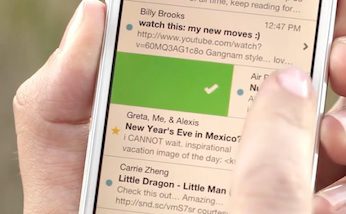 A clean email inbox may seem an impossible feat, but it’s what mobile app Mailbox offers, and what Dropbox will help the young company deliver.

Dropbox enables users to store and share files in the cloud. Mailbox sits on top of a Gmail account in iOS or Android and offers relatively revolutionary ways of dealing with email. Users can reposition inbox items by dragging them, swipe emails into archives or the trash, be reminded to follow up on an email later or scan an entire conversation in a chat-like manner.

After spending time with the Mailbox team, blogged Dropbox founders Drew Houston and Arash Ferdowski, “It became clear that their calling was the same as ours at Dropbox—to solve life’s hidden problems and reimagine the things we do every day. We all quickly realized that together we could save millions of people a lot of pain.”

Houston and Ferdowski added that they’re “looking forward to making Mailbox even better and getting it into as many people’s hands as possible.”

Which is no small feat. So many people want Mailbox that the company has a daunting, first-come-first-served reservations list with hundreds of thousands of folks on line.

After a month in the Apple App Store, company officials say on their site: “We’ve taken over 1.3 million Mailbox reservations and are processing over 60 million emails every day.”

In addition to getting Mailbox to the people who want it, the Mailbox team says it’s eager to build in new features and support additional email providers and mobile devices—all while quickly scaling out its service.

“Enter Dropbox … a profoundly talented bunch who build great tools that make work frictionless, and Mailbox fits Dropbox’s mission like a glove,” the company said on its site. “Plus, they’ve got a ton of experience scaling services and are experts at handling people’s data with care.”

Mailbox emphasized that it is not going away, just getting some needed help in growing fast.

Under the terms of the deal, the 13 employees of Mailbox owner Orchestra will go to Drobox, The Wall Street Journal reported March 15, adding that Dropbox is valued at around $4 billion. The fiscal terms of the deal have not been released.

Houston told the The Journal that under Dropbox, Mailbox will remain a stand-alone app, and eventually Dropbox will use Mailbox’s technology to enhance some of its features, like email attachments.

In addition to highlighting the enormous need for email inboxes to be reimagined and redesigned, Mailbox has received enthusiastic reviews. Business Insider called it the “closest anyone has come to fixing email,” TechCrunch called it the “best email app you’ll ever use” and Forbes suggested that Google or Apple might want to buy it.