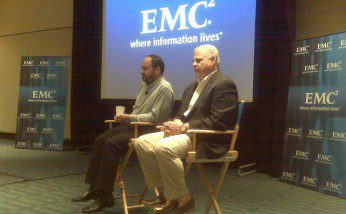 Storage and data protection giant EMC made two things clear on Dec. 4: what its key development strategy for 2013 is and what former VMware CEO Paul Maritz will be doing for a while until current CEO Joe Tucci decides he wants to retire.

Maritz, currently serving as EMC’s chief strategy officer, will direct a new corporate entity that will specifically develop cloud and big data IT products and services. Tucci has said he expects to work through 2013 but is not signed on to be CEO any longer than that at this point.

EMC and VMware, its virtualization software-making subsidiary, revealed Dec. 4 that in 2013 they will merge their data analytics and cloud application groups into something called the Pivotal Initiative.

This is an interesting development in more ways than one. Ever since their merger in December 2003 (which cost EMC $825 million), these two corporate cultures have never seen eye-to-eye. EMC is an old-school East Coast corporation with an IBM-like culture, while VMware is (and still is, to a great extent) the laid-back West Coast startup. Both styles work, but they don’t always work in harmony.

Thus, it makes sense that a separate spinoff focused on future IT markets is in the making here.

EMC and VMware said they will combine several of their divisions into the new group by the second quarter of 2013 and that the specific operational structure will be determined at that time.

“Over the years, EMC has very successfully built and acquired an impressive collection of businesses and technologies geared toward, among others, the formation of Big Data and analytics, Cloud Application Services (PaaS) and the emerging Software Defined Data Center paradigm,” the blog post stated. “The Pivotal Initiative signals an entirely new level of focused investment and organization to maximize the impact that these assets can have for customers and EMC’s path forward.

What Pivotal Initiative Means to VMware

EMC said that the new initiative will augment the work VMware has done.

“The Pivotal Initiative will enable a new generation of workloads that can exploit the advancements VMware is driving in the data center,” EMC stated. “By realigning resources within the Pivotal Initiative, VMware can more fully focus resources on delivering the software-defined data center, the de facto infrastructure at the heart of cloud computing, and on end-user computing—two areas where we see tremendous opportunity for growth.”

Maritz, who supervised a highly successful four years at the world’s largest virtualization software provider, is on the VMware board of directors and ostensibly is EMC’s CEO-in-waiting.

Tucci, 65, EMC’s president, CEO and chairman of the board, said in July that he intends to stay on in his current positions “at least through 2013. I’m feeling energized, and as long as the board thinks I add value, well, I feel good about staying.”