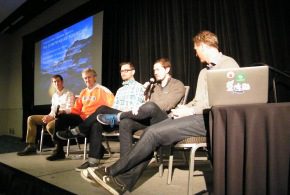 VANCOUVER, British Columbia—Building a company from freely available software might not seem like the most logical idea, but it’s one that is working for many vendors in the OpenStack cloud ecosystem. In a panel session at the OpenStack Summit here, the founders of cloud storage vendor SwiftStack, cloud database vendor Tesora, cloud vendor Piston Cloud Computing and cloud service provider Blue Box Cloud as well as the CEO of DreamHost, Simon Anderson, detailed their experiences and challenges in building OpenStack-powered businesses.

Jesse Proudman, founder and CTO of Blue Box Cloud, told the standing-room only audience that he initially built his company as a single founder and that was a really hard thing to do. In retrospect, he found, having the right team from day one is a key element of success. As a single founder, for some of the early years of Blue Box, he was also bootstrapping the company with his own money, using every resource possible, including credit card debt.

Blue Box has since gone on to raise $26.6 million in funding as Proudman has transformed the business.

Finding gaps in the marketplace where there is a need for a service that does not yet exist is also what led Ken Rugg, co-founder and CEO of Tesora, to his current path as an OpenStack database-as-a-service vendor.

“You have to make sure you’re delivering value and something that people want,” Rugg said.

Joe Arnold, co-founder of SwiftStack, emphasized that for his business, getting early customer wins was key to its success—as a way to show both investors and potential customers that there is demand for a product or service.

Proudman said that with OpenStack there is a lot of complexity, which creates a huge opportunity for those who solve problems. Christopher MacGown, co-founder and CTO of Piston Cloud Computing, agreed, noting that customer pain points are all really just opportunities for a vendor to solve a problem.

In terms of OpenStack itself, though all the panelists’ technologies work in OpenStack, that’s not really what their customers’ pain points are. Rugg said that for Tesora, OpenStack is the go-to-market platform for his customers who have database challenges that they are just looking to solve, while Arnold said his customers are just looking to solve storage problems. Often, why a customer ends up on OpenStack has nothing to do with OpenStack itself, but rather is just about solving a technology pain point, Proudman added.

From a product and services perspective, MacGown said that simply building a product and hoping customers will buy it is not the right model for success. His company initially spent six months building a product, but really should have been spending the time to see if the market really wanted the product in the first place, he said.