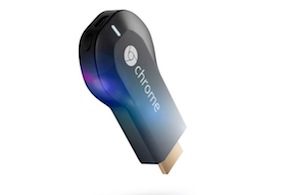 Google’s Chromecast television dongle just got even more useful for watching online video with its newly announced compatibility with Hulu Plus service from Hulu.

The addition of Chromecast support in the Hulu Plus app was unveiled by Shanna Prevé, the global head of content partnerships for Google, in an Oct. 2 post on the Google Official Blog.

“Now you can easily enjoy your favorite shows, such as ‘Modern Family,’ ‘New Girl’ and ‘Parks and Recreation,’ on your big-screen TV by casting from Hulu Plus on your mobile phone or tablet,” wrote Prevé. “It’s the same intuitive, remote-free experience you’ve come to enjoy with the other Chromecast-supported apps, and is as simple as pressing the Cast button which will now appear in the app.”

Chromecast users will have to subscribe to Hulu Plus at $7.99 per month to receive the content, as they have to do with other subscription-based services that are supported by Chromecast. The $35 TV dongle went on sale July 25.

Chromecast is a phone- and tablet-controlled dongle that puts new convenience, and Google, into the television-viewing experience. Chromecast plugs into the High Definition Multimedia Interface (HDMI) slot on an HDTV, enabling users to direct video content to the TV via a smartphone, tablet or PC, whether it’s running an operating system from Google, Apple or Microsoft. Plus, while the phone is busy “casting,” it can still be used for other things, like emailing.

“To start casting your favorite Hulu Plus content from your Android phone, tablet or iPad (support for iPhone coming very soon), just check that you have the latest version of the Hulu Plus app for Android or iOS,” wrote Prevé.

Chromecast devices are sold through Google Play, Amazon and BestBuy.com, as well as in Best Buy stores, according to Google.

The debut of Chromecast was marred somewhat shortly after its release when a 90-day free Netflix promotion that was included in the purchase of the dongles was quickly ended after overwhelming demand by consumers. The free promotion for three months of Netflix for new and existing users of the service only had a set number of vouchers for use. The quick demise of the special Netflix freebie led to some disappointed consumers who placed online orders for the devices after the free subscriptions were gone.

The Chromecast device is the company’s offering in a fast-growing, increasingly complex market in which Amazon and Netflix are now developing original “television” content. Apple currently offers the $99 Apple TV, which enables users to watch content on their television from iOS devices, as well as from iTunes and content sources such as Netflix, Hulu Plus, YouTube and Vimeo. It recently made major updates to Apple TV with content from, among other sources, HBO Go and WatchESPN.

The Chromecast devices have been receiving monthly software updates from Google to improve performance, reliability and security as part of the company’s regular release cycles.