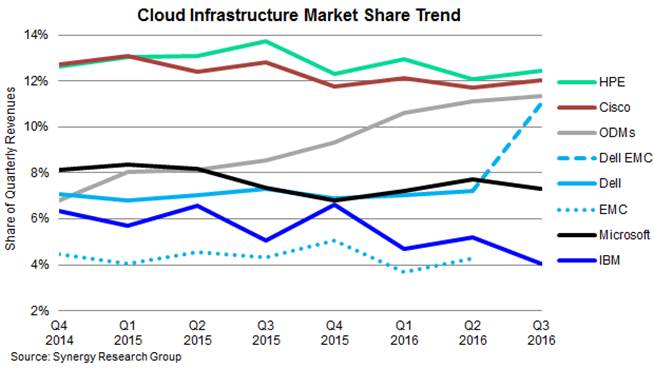 Older enterprises Oracle, Microsoft, IBM, HP, Dell and Cisco Systems came to realize the power and profitability of the cloud later than newer-gen companies that include Yahoo, Google, Salesforce and others. Nonetheless it’s the veterans who are now providing most of the cloud infrastructure that web-based app providers are using.

New Q3 data from Synergy Research Group released Dec. 19 shows that Hewlett-Packard Enterprise has kept its No. 1 position over Cisco in the strategically important cloud infrastructure equipment market, while Dell EMC is now challenging the top two after the completion of their historic merger–at $67 billion the largest in IT history.

Meanwhile, ODMs (contract manufacturers) in aggregate continue to increase their share of the market, driven by continued heavy investments in data centers by hyperscale cloud providers.

Microsoft and IBM round out the group of top cloud infrastructure vendors. HPE and Cisco have been in a closely contested leadership battle in this market for the last 16 quarters, over which time their total revenues are virtually identical. Across the different types of cloud deployment, Cisco continues to hold a commanding lead in public cloud infrastructure while HPE has a clear lead in private cloud.

[To see a larger view of the image, right-click on it and select “View Image.”]
Total cloud infrastructure equipment revenues, including public and private cloud, hardware and software, are poised to reach $70 billion in 2016 and continue to grow at a double-digit pace. Servers, OS, storage, networking and virtualization software combined accounted for 94 percent of the Q3 cloud infrastructure market, with the balance comprising cloud security and cloud management.

By segment, HPE has a clear lead in the cloud-server segment and is a main challenger in storage. As one might imagine, Cisco is dominant in the networking segment and also has a growing server product line. Dell EMC is the second-ranked server vendor and has a clear lead on storage, Synergy said.

Microsoft features heavily in the ranking due to its position in server OS and virtualization applications, while IBM maintains a strong position across a range of cloud technology markets.
“Growth in private cloud infrastructure is slowing down as enterprises shift more attention and workloads to the public cloud, but that means that there is a continued boom in shipments of infrastructure gear to public cloud providers,” said John Dinsdale, Chief Analyst and Research Director at Synergy Research Group.

“For traditional IT infrastructure vendors, there is one fly in the ointment, though: Hyperscale cloud providers account for an ever-increasing share of data center gear, and many of them are on a continued drive to deploy own-designed servers, storage and networking equipment, manufactured for them by ODMs. ODMs in aggregate now control a large and growing share of public cloud infrastructure shipments.”

Synergy Research Group provides quarterly market sizing and segmentation data on cloud and related markets, including company revenues by segment and by region.