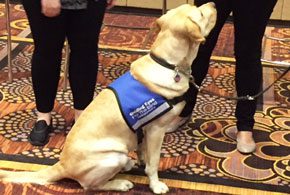 IBM today announced that Guiding Eyes for the Blind, a non-profit organization that breeds, trains and places service dogs with the blind and visually impaired, has adopted the IBM Cloud and is using the power of Watson to help produce dogs fit to serve as guide dogs.

Guiding Eyes for the Blind, one of the United States’ leading breeders and trainers of service dogs, has been collecting and analyzing vast amounts of information about its dogs for years. The organization has amassed half a million health records and more than 65,000 temperament records on its dogs since 1954. And it has continually worked to perfect its breeding and training processes to produce superior animals best suited for service.

The organization has collected more than a dozen generations of breeding information. It has structured data such as medical records and genetic mapping, as well as unstructured data from scanned hard-copy questionnaires that trainers and host families fill out regarding their experiences with the dogs.

However, the data was becoming difficult to manage on its aging systems. Guiding Eyes decided to move to the IBM Cloud, not only for the more simplified IT and data management it provided, but also for improved data accessibility and analysis capabilities accessible through Watson.

“People don’t typically think about an organization like ours as a big data company, but we cannot succeed or grow without it,” said Thomas Panek, president and CEO of Guiding Eyes, in a statement. “By collecting information about our dogs over the years, we can dig into the data to pull out meaningful insights about health, behavior, temperament and so much more. However, all of that was becoming increasingly difficult on our legacy systems. By putting it on the IBM Cloud, we will simplify our IT and make our data more accessible for more analysis.”

At IBM’s InterConnect 2016, Jane Russenberger, director of Genetics and Breeding at Guiding Eyes, said the organization’s mission is to place guide dogs with people and over the years it has placed more than 7,300 guide dogs with blind or visually impaired individuals. The organization also provides service dogs to children with autism.

“We had a traditional IT system and it was breaking down, so we moved to SoftLayer,” Russenberger said. “It cut our costs by 40 percent and we had a lot more reliability.”

Though the cost savings and reliability were welcome, it was the access to Watson that really caught Russenberger’s attention. She started at Guiding Eyes 28 years ago, and prior to that, had been experimenting with genetics and breeding cows on a farm. So she was excited to begin applying data to the breeding of guide dogs, she said. At Guiding Eyes she helped to identify preferred qualities in dogs such as health, confidence, love and temperament.

Through its Canine Development Center (CDC), the organization has been a leader in canine genetics research, breeding technology and behavioral development, she said.

For instance, even before Watson, Russenberger said the CDC was able to reduce hip dysplasia from occurring in 20 percent of the dogs to nearly zero through selective breeding. Hip dysplasia is an aliment seen in larger dog breeds that causes their hips to give out and leads to crippling lameness and arthritis. However, with Watson the sky is the limit.

“Often it’s nature versus nurture,” Russenberger said. “But we want to use Watson to help with breeding the dogs and also with pairing individuals with dogs. We want the right dog with the right person.”

Watson will help with the nature part of that equation. The nurture part comes from the dog raisers and the trainers Guiding Eyes enlists. One such puppy raiser, Lorraine Trapani, an IBM executive program manager for Government and Regulatory Affairs, said she initially became a service dog puppy raiser when her husband was diagnosed with pancreatic cancer and given three months to live. However, with the puppy around, he fought for 18 months before succumbing to the disease, and Trapani has held her door open for pups to raise ever since, she said.

“IBM is working with this organization to increase the number of dogs with the right traits to be guide dogs,” Trapani said.

Indeed, not all of the puppies that enter the program graduate to become guide dogs. About 50 percent do not make it, and those who don’t are used as service dogs for autistic children or for detection work—searching for drugs, guns, explosives and such, Russenberger said. At nearly $50,000 to train each dog, there is little room for error.

Tseng and students in his machine-learning classes are using Watson’s Personality and Natural Language Processing APIs on IBM’s Bluemix platform as a service to sift through the CDC data try to identify patterns and correlating traits, characteristics, environmental conditions and personalities of the best-performing dogs—for both dogs and trainers.

By May, the group is hoping to establish a process for identifying data that will lead to producing dogs best suited for service to the blind.

“Guiding Eyes is a great example of how IBM Cloud can help organizations innovate new business models and processes that were heretofore unthinkable,” said William Karpovich, general manager of IBM Cloud Platform, in a statement. “Through the IBM Cloud, Guiding Eyes is now able to advance even further its critical work in breeding, raising and training service dogs for those in need.”

And then there is Watson.

“Once we get Watson to understand how to make a guide dog, we’re going to look at the genome and use genomics to make the dogs right—for the right people,” Russenberger said.

A video of Jackson, a dog going from puppyhood to graduation as a guide meeting his new partner, can be found here. Meanwhile, Ed, pictured in the photo accompanying this article, is a 15-month old yellow Labrador Retriever who is training to become a guide dog. But perhaps Guiding Eyes’ most famous student is Wrangler, a 2-year old yellow Lab who gained notoriety over the past year as a regular on NBC’s “The Today Show.”