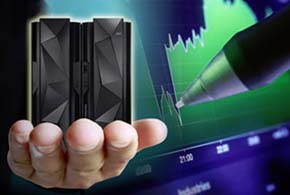 IBM and CSC announced the expansion of an existing partnership that will bring IBM’s mainframe capabilities and cloud infrastructure to bear for CSC and its customers.

Under the agreement, IBM will deliver its Cloud Managed Services offering for its z Systems mainframe platform—known as IBM Cloud for z—to CSC customers.

IBM will provide mainframe hardware, software, services and cloud infrastructure to CSC customers to help them tap into the advantages of the cloud, including lower startup costs.

Moreover, this collaboration is further proof that the mainframe is not dead and does not appear to be going anywhere.

“IBM Cloud Managed Services for z Systems provides a level of flexibility and performance that is difficult, if not impossible, to find in other solutions,” Philip Guido, general manager of IBM Services in North America, told eWEEK.

He said with the new offering, customers get the flexible pricing and capacity of the cloud. Indeed, Guido noted that the shared infrastructure of the cloud helps to reduce the cost of computing by enabling users to use only what they need when they need it.

“They also get access to the mainframe’s unmatched speed and security—a requirement for some industries such as financial services,” he added.

For his part, Stephen Hilton, CSC’s executive vice president and general manager of Global Infrastructure Services, said, “Many clients are looking for ways to make historically fixed cost more variable to migrate from legacy platforms to modernized applications and to a cloud enabled infrastructure.”

The previous partnership between IBM and CSC, announced in January, was aimed primarily at helping enterprises accelerate their transition to the cloud.

That effort was part of IBM’s strategy to tap systems integrators to help expand the reach of the IBM Cloud platform. The initiative included the modernization and development of key applications that support mobile, analytics and cognitive intelligence across hybrid cloud deployments.

Under that earlier agreement, IBM Cloud became a key component of CSC’s IT strategy to deliver solutions to meet complex compliance requirements of enterprise customers. The integration of the IBM Cloud with the CSC Agility Platform has enabled users to take advantage of the hybrid cloud and deploy some 10,000 applications, IBM said.

Charles King, principal analyst at Pund-IT, said the last deal IBM made with CSC simply enabled CSC customers to use IBM Cloud assets. However, this new effort adds IBM’s mainframe-based Cloud for z platform to the mix—a point that will be of particular interest to mainframe customers that wish to develop hybrid cloud usage models, he said.

At the same time, however, the service provides businesses without mainframe experience with flexible and affordable access to IBM’s “preeminent” enterprise computing platform, said King.

“The end result should increase satisfaction among existing mainframe clients and open the door to new client engagements,” King noted. “Those points are certainly positive for IBM and the mainframe but they will also be beneficial to CSC’s business customers.”

In reporting its second-quarter earnings results IBM Chief Financial Officer, Martin Schroeter, said revenues for the IBM Systems segment were down 23.2 percent and revenues for the z Systems mainframe were down 40 percent. However, this is not surprising for this stage of the IBM mainframe release cycle, Schroeter said.

Chris O’Malley, CEO of Compuware, which makes and markets software for mainframe users and developers, said he found it interesting that during his discussion of the financial results, Schroeter said he thought it unlikely that system-of-record workloads would be going to the cloud and that it would rather be system-of-engagement work that goes to the cloud.

“That’s another way of saying that people are going to leave a lot of stuff on the mainframe and that the workloads that are going to the cloud on the distributed side are those things that are necessary for mobile,” O’Malley said.

Mobile and digital are driving huge back end requirements, argued O’Malley. “And IBM can’t be so disruptive of itself that it loses sight of its focus on the mainframe,” he added.