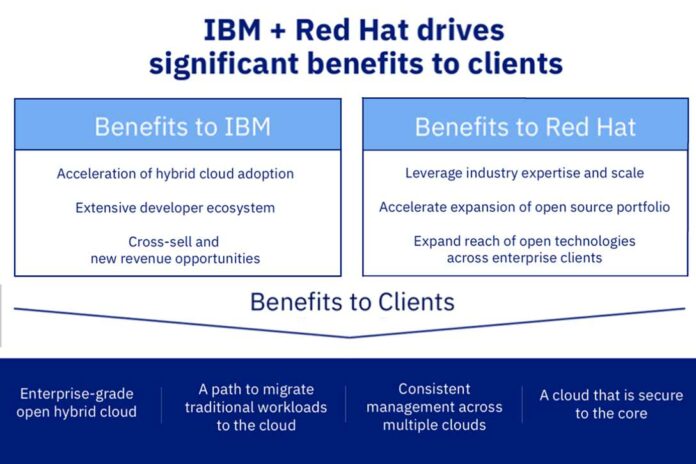 IBM is making a significant play in an increasingly hybrid- and multicloud world with its proposed $34 billion acquisition of longtime technology partner Red Hat, a leader in open-source enterprise software that was making its own push into the cloud.

IBM officials over the weekend announced the giant tech vendor’s intent to buy Red Hat, with Chairman, President and CEO Ginni Rometty saying during a conference call Oct. 29 that in the high-profile competition in the private and public cloud markets, the deal plants her company’s flag firmly on the side of open cloud environments.

“This cloud battle will be open versus proprietary,” Rometty said. “We will be the leader in open. Customers don’t want to be locked in.”

IBM has been aggressively growing its portfolio of public and private cloud offerings over the past several years, including such recent solutions as IBM Cloud Private, Cloud Private for Data, AI Openscale and Multicloud Manager. Those join integrated solutions like IBM Cloud, Cloud Migration Factory, Cloud Application Innovation and Cloud Garages. The company has 90,000 cloud architects, and 30 percent of its outsourcing backlog is related to the cloud.

The cloud space is dominated by Amazon Web Services (AWS), which holds about 40 percent of the cloud provider market. Next is Microsoft Azure at about 15 percent, followed by IBM at 7 percent, according to Synergy Research Group. Google and Alibaba complete the top-five list. However, among the leaders, IBM was the only vendor to lose market share year-over-year in the third quarter, though it was only by 0.5 percent.

There is room to grow. About 20 percent of enterprise workloads run in the cloud, which leaves another 80 percent to make the migration. The combination of IBM and Red Hat will create a company with the tools to help customers move many of those applications to public, private or hybrid clouds, and to manage them across multiple clouds, according to officials with both companies.

This was a key motivator behind IBM’s decision to buy Red Hat, according to Dennis Gaughan, chief of research of applications at Gartner. The deal reportedly has been in the making since April.

“IBM sees a significant opportunity to help enterprises with their migration of applications to cloud,” Gaughan told eWEEK in an email exchange. “While customers are already consuming lots of cloud services today, many enterprises still have the majority of their applications on premises and those applications are rarely architected to run well on cloud platforms in their current form. IBM sees the opportunity to help customers modernize those applications to make them cloud ready through the combination of Red Hat and IBM products and services.”

In talking about this deal, IBM officials “continue to stress hybrid (on premises and public cloud) and multi-cloud as the reality for enterprises,” he said. “IBM needed to do something big and this certainly qualifies; the question remains as to whether the combined company can capture enough of those cloud modernization deals to support the growth potential. It’s not like AWS, Microsoft and Google (and others) are going to just cede the market. They are all trying to capture their share of customers’ enterprise application portfolios that shift to cloud.”

Patrick Moorhead, principal analyst with Moor Insights and Strategy, told eWEEK he is unsure whether buying Red Hat will help out IBM as much as officials are saying. IBM and Red Hat already collaborate on myriad efforts in the cloud and enterprise. When Dell bought EMC—and with it VMware—for $60 billion in 2016, Dell didn’t have much of a software business, Moorhead said. It got that with VMware. For its part, IBM was already strong in software—including open software—so adding Red Hat may not bring the same amount of juice.

He noted that while the IBM competes with AWS, Azure and others in the public cloud market, it also faces competition from VMware Cloud and Azure in the on-premises hybrid cloud world.

The 20-80 split between enterprise applications in the cloud and those still on-premises could benefit IBM, the analyst said. He estimates that within five years, it could be more of a 50-50 split, which means enterprises are going to need help moving workloads to the cloud.

“Some of these companies have 5,000 applications, and you can’t move those over very quickly,” Moorhead said, adding that “budgets are going into [modern cloud-native] applications,” not into reworking legacy workloads for the cloud.

That could mean more business for a combined IBM/Red Hat, particularly in the services area to help companies move those applications into the cloud, including the IBM Public Cloud. With Red Hat in the fold, IBM will “have a seat at the table in the enterprise” where it didn’t have such an opportunity before.

Gaughan agreed, saying that “IBM clearly sees this as both a product play (RH assets like OpenShift) and a services play—help clients through their cloud journey and even potentially provide managed services around hybrid and multi-cloud.”

Red Hat has been aggressive in the cloud as well, creating Linux-based tools for customers to work in a modern application world that includes containers—with its OpenShift container platform—and the Kubernetes orchestration technology. Once the acquisition closes—which is set to happen in the second half of 2019 after regulator and Red Hat shareholder approval—Red Hat will become an independent unit with IBM’s Hybrid Cloud group.

Current Red Hat President and CEO Jim Whitehurst will lead the Red Hat team and join IBM’s senior management team, reporting to Rometty. IBM will keep Red Hat’s headquarters, facilities and brands, officials said. Whitehurst said that for Red Hat, being able to leverage IBM’s scale and global reach will be a boost for his company. Demand for Red Hat products and services is growing, and the company needed a way to scale to meet the demand.

“Powered by IBM, we can dramatically scale and accelerate what we are doing today,” he wrote in a blog post.