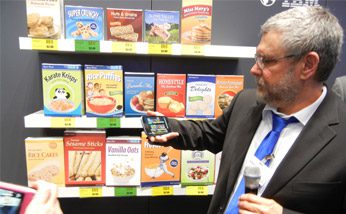 HANNOVER, Germany—A new smartphone app that provides detailed information about products on store shelves just by taking a look at the packages is about to hit store shelves, first in the UK and then in the U.S. within the next few weeks.

According to project manager Amnon Ribak from IBM Research in Haifa, Israel, the new app will initially be sold to retail stores for use as a part of their customer loyalty programs.

The new app, which IBM is calling the Augmented Reality Shopping Assistant, works when a store customer scans the shelves in a retail store with their smartphone. The app then recognizes the packaging, finds each product in a cloud database, and presents a tag on the screen of the smartphone with basic information on each product showing on the phone’s screen. The shopper can tap a tag and get more detailed information, including nutritional information or pricing of the same product in other sizes.

The product works by actually recognizing the package. There’s no need to scan a bar code on the box. The app can also integrate with social networks to see user reviews of the product or locate more detailed information.

IBM had originally announced the app in July of 2012. The launch announcement took place at a press event at the CeBIT trade show here.

According to Ribek, IBM’s shopping app is designed to allow customers to flag areas of interest so that the app can note when products meeting the requirements show up in a phone image. You could use a version of the app in a grocery store to highlight products that are low in fat, below a specific number of calories per serving or perhaps gluten-free.

You could also use the app to highlight products that are the best value. In addition, the app has the ability to tell the retailer or the product manufacturer when out-of-date products are appearing on store shelves using IBM’s Smarter Commerce software.

Ribak said that while the app will initially be provided by retailers to enhance customer loyalty programs, it would eventually be available as a standalone app. Ribak did not say what mobile platforms would be supported initially, however, he demonstrated the product on a Samsung Android device.

IBM is not releasing pricing for the Augmented Reality Shopping Assistant, although an IBM spokesperson told eWEEK that the retailer-specific versions of the app will be available for free.