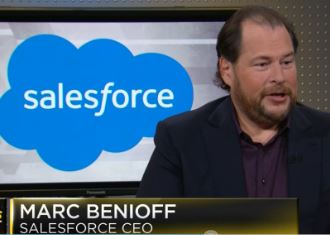 SAN FRANCISCO–There are 815,358 residents of San Francisco County, according to the 2010 U.S. census. Only one of them was asked to host the president of the United States when he visited the Bay Area on April 20: Marc Benioff.

Wonder is a superstar of the music world; Obama in the political world. And Benioff, founder and CEO of Salesforce.com and offshoots such as Force.com and Chatter.com, has been a legitimate superstar of the business and IT worlds ever since he foresaw what we now know as the “cloud” more than a decade ago.

In fact, Rob Enderle, principal analyst and president of the Enderle Group in San Jose, Calif., credits Benioff and Salesforce.com for pretty much defining cloud computing as we know it today.

“Salesforce.com was really the first big wake-up call on cloud computing, coming before we really understood what it meant,” Enderle told eWEEK. “They were the test case that showcased the massive advantages of going in this direction, and, for the most part, the cloud computing industry owes much of its success-particularly in the applications space-to them.”

Since Benioff, a fourth-generation San Franciscan, founded Salesforce.com in March 1999 in a rented Telegraph Hill apartment, the company has grown to become an $18 billion conglomerate with 90,000 customers. Its headquarters is at One Market Street, an old-school but classy-looking building in one of the most prestigious locations in San Francisco.

“We now have 6,000 people working at Salesforce,” Benioff said, “but we still have the feeling of being a startup.”

The CEO’s mission hasn’t wavered in the dozen years Salesforce.com has been supplying online sales and management tools to corporations, small and midsize businesses, and single-owner proprietorships: to help companies do their business more effectively-and to do it without selling on-premises IT hardware and software.

“The world is changing rapidly,” Benioff said, “and we’re moving into this mobile, social world that’s [running] on next-generation open platforms. That’s very exciting. All of our customers are rethinking their applications: to run their company, to work with their customers, to collaborate, to share information.

“A lot of these customers are still on old platforms, like Lotus Notes or Microsoft SharePoint, and they want to evolve. You see this huge surge in new technology, like BlackBerrys, iPads. … I see our customers deploying thousands of iPads, and we just bought 2,000 iPads for our own reps.”

Benioff and Salesforce.com are true socialists, in the business sense of the word. Customers want to install and deploy enterprise social networks, social monitoring and other new-generation tools.

“One of our customers, KLM [Airlines], just deployed our Service Cloud internally, and it’s not just managing their call center or contact center, but Twitter streams and all the social networks, too. We’re also seeing a need for social sales forces, social networks, social marketing-and customers want to build custom apps. So we’re building a platform that inherently has that social, mobile capability in it.”

If you really want to know what your customers and potential customers are thinking and saying about your business, you need to read and analyze the forums where they socialize. Benioff realized this early on.

When Salesforce.com bought Heroku for $212 million in December 2010, it acquired a Ruby-based application PAAS (platform as a service) that was powering more than 105,000 social and mobile cloud applications and boasted a worldwide development community of more than 1 million coders. Its customers include Twitter, Groupon and Hulu.

“We bought Heroku because we want customers to use any language they choose [in their own platforms],” Benioff said. “We now have more than 130,000 apps on Heroku, and there are 3,000 to 4,000 new apps going up every week.”

Examples of these applications include Flightcaster, a complex flight prediction application; CloudApp, an easy way to share files on a Mac; and Clobby, which adds group chat to Facebook.

“This is all [done in] recognition that enterprises realize they need to change because where their customers are has changed,” Benioff said. “Customers are in the cloud.”

Benioff knew what he wanted with Salesforce early on, said Charles King, principal analyst with Pund-IT in Alameda, Calif. “Benioff approached the Internet differently,” King said. “Before the [tech] bubble burst [around 2000-2001], the hot new trend was for an Internet company to become an application service provider [ASP].

“This was the early version of the cloud, but the key factors weren’t in place yet to make it work correctly. I remember talking to some of Benioff’s people about their new startup in about 1999 and asking them if they were an ASP. They immediately said: ‘Don’t ever mention that term in connection with us again. We’re not in that boat.'”

The current convergence of several factors is the reason for these changes: the emergence of broadband connectivity as a de facto standard, vastly improved servers and networking equipment, relatively inexpensive (and virtually limitless) storage capacities, and great improvements in the deployment of online services since the ASP days of the late 1990s.

“We always look at the consumer network as the first place to go,” Benioff said. “When you combine the Facebook user base with the Twitter user base, you’ve got more than a billion people in social networks.

But Benioff doesn’t think that first version of the Internet took the industry to a new level. “The first version let us have browsers, which was very important because that let us get out of the operating system,” he explained. “The browser was kind of Cloud 1, which was, ‘Now I have a browser, so I can access an app in a standard way and get out of the proprietary APIs of the operating system.’ That was a huge shift.

Why the tablet is an important cloud tool

The surprise entry into the enterprise is Apple’s iPad, according to Benioff. Though this device was designed for the consumer market, it has already become a major enterprise staple. “I’ve talked with 200 CIOs in the last six weeks, and what I continually hear is that they are rolling out iPads en masse,” Benioff said.

“[CEO] Carl Bass of Autodesk runs his whole company on iPads, as do others. This is the future. The past is the notebook, the netbook, the desktop.

“The reason I know this is that the kids who are coming out of college and going into major corporations are asking, ‘Where’s my social network? Where’s my iPad?’ They don’t want us to give them a laptop. They want a next-generation device.”

Benioff is convinced that Cloud 2 is on the verge of widespread adoption and that the new devices and Web services will supply the foundation for it.

“Then we are going to move into Cloud 3, which will be all about the domination of these tablets, next-generation data types-like video-on these devices, and open platforms that bring [application] portability that we have not seen previously,” he predicted.

“Clouds will be standardized. Custom clouds will be amazing places where customers can live inside companies. This is going to be a big shift.”

What does Benioff see as his highest priorities now, as Salesforce.com and its sidekicks Force.com (the development platform for ISVs), Service Cloud and Chatter.com move through 2011 and into 2012? “No. 1, we’re focused on keeping our customers happy,” Benioff said. “We’re delivering half a billion transactions a day to our customers. Last quarter we delivered something like 30 billion transactions.

“That means the database is more important than ever. That’s why we’ve launched Database.com, a proven database for more than a decade. Our customers are looking to us more and more to lower their database costs. You’ll hear more about that soon.”

One of the customers who’s happy with Salesforce.com is the Waypoint Real Estate Group in Oakland, Calif., a startup that buys foreclosed homes and re-leases or rents them–often back to the former owners. CTO Ali Nazar told eWEEK that though he could have built his company’s intricate system of property-tracking and financial applications another way, he could not have done it with the speed and cost-efficiency he achieved with Salesforce.com.

“When we started, I spent about $250,000 and four months building our CRM application,” Nazar said. “When I started using Salesforce for an additional part of the system, I realized I could have built the entire system on Salesforce. Now we use it for most of what we do.”

So what’s next? “Every company is going to have an enterprise social network,” Benioff said. “Chatter [an internal, secure Facebook-like service for enterprise networks] is really a stream of information that can be captured by proprietary UIs like ours, but we want to have it available as a REST [representational state transfer] API, so that every social network can participate in Chatter.

“Chatter now has over 80,000 paying customers, which makes it by far the largest enterprise social network in the world. Companies like Symantec and BMC are using it because you can see people working and collaborating in a new way.”

Chatter now is starting to be used in supply chains, with enterprises sharing certain types of nonproprietary information with their partners and resellers, Benioff said. “They’re starting to use Chatter in everything,” he added. “Vendors, suppliers, partners, customers-they all will begin to participate in these feeds.

“For example, we have a private version of Chatter for all the customers who attended DreamForce [Salesforce.com’s annual conference], which is a big laboratory for us. You can learn a lot about us by using it.”