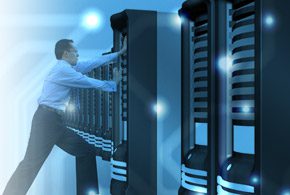 Microsoft is taking a new approach to contributing new cloud hardware designs to the Open Compute Project, the company announced this week.

Going back to its roots, the company’s new initiative, called Project Olympus, will take a software-like approach to developing new open-source designs for data centers. The company hopes to imbue some of the same agility that defines modern software development into the process of creating servers that deliver cloud software and services.

“The current process for open hardware development is to contribute designs that are production-ready,” wrote Kushagra Vaid, general manager of Microsoft Azure Hardware Infrastructure, in a blog post. “At that stage, the design is essentially finalized—almost 100 percent complete—and this late contribution delays the development of derivative designs, limits interactive community engagement and adoption, and slows down overall delivery.”

Starting with Project Olympus, Microsoft is contributing its open-source designs for data center systems much earlier in the process, at around 50 percent, said Vaid. By delivering the company’s latest innovations into the hands of the community sooner, solutions providers can iterate faster and shorten the time it takes to commercialize their own next-generation cloud servers.

Coming full circle, many of those Open Compute Project (OCP) servers wind up in Microsoft’s own data centers. More than 90 percent of the servers purchased by the company for its cloud services and software platforms follow OCP specifications.

Microsoft intends for the new design “to become the foundation for a broad ecosystem of compliant hardware products developed by the OCP community,” Vaid said.

Specifications on the mechanical and electronic server chassis interfaces, motherboard and power distribution unit are currently available on GitHub. The company plans to open source the entire rack in the coming weeks, Vaid added.

“Microsoft is opening the door to a new era of open source hardware development,” said Bill Carter, chief technology officer at the Open Compute Project Foundation, in a statement. “Project Olympus, the re-imagined collaboration model and the way they’re bringing it to market, is unprecedented in the history of OCP and open source data center hardware.”

The move follows the release of the draft specifications for Zaius from Google and Rackspace. The new OCP data center server features an IBM POWER9 (P9) CPU (or up to two) and a PCIE Gen 4 serial bus and supports DDR4 RAM.

Google and Rackspace, too, are offering up their designs to the OCP community early in the development process

“Following this specification, we plan to release elements of the board’s design collateral, including the schematics and layout,” said Google Technical Program Manager John Zipfel, in an Oct. 14 announcement. “This is a draft specification of a preliminary, untested design, but we’re hoping that an early release will drive collaboration and discussion within the community.”