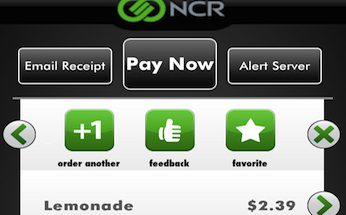 NCR, the 128-year-old company that once went by the more formal National Cash Register and at the turn of the last century developed the first electronic register and then automated credit systems, describes itself as being at the “center of the self-service revolution.” On Dec. 5 it introduced NCR Mobile Pay, a cloud-based solution for restaurants that’s making self-service mobile.

On any personal device with a browser, a restaurant customer can pull up his or her tab to perform actions such as paying the bill, ordering another drink, paging a server or recommending items to friends through social networks, among other features. Soon, there will also be the option of accessing the service through iOS and Android apps.

The solution also offers customers a way to interact with a venue—they can create a profile, even an anonymous one, that enables them to take note of what they’ve ordered on previous visits—a helpful feature at, say, a wine bar.

“A big part of this was being able to start where we are now,” Mike Finley, vice president and CTO of hosted solutions at NCR Hospitality, told reporters at a Dec. 4 gathering at City Winery, a Manhattan-based early adopter of Mobile Pay. Finley’s comment nodded to near-field communication (NFC), the mobile technology that’s been tightly associated with mobile payments, though it has yet to take off in a big way.

Customers have become accustomed to waiting for a server to bring a check, then to return for a credit card and then to return again with a slip to sign, said Finley. “We’ve sort of boiled the frog.”

With Mobile Pay, the customer is in a position of control.

“But you also don’t want to cut the server out—these are highly trained people,” Finley said, with a gesture toward the City Winery staff. “We let the customer decide how they’d like to use the solution.”

Restaurants also have options, such as whether to include or leave out features such as the ability to page a manager.

City Winery is uniquely suited to take advantage of Mobile Pay. The Manhattan-based venue, which makes wine on the premises and has 11 wines “on tap,” features a traditional restaurant space but also a concert venue, where its 300-plus seats can become the equivalent of individual tables. When the lights go down, requesting (or offering) another drink can be awkward. Mobile Pay makes it possible for this to be done silently—and prevents customers from having to wait around while dozens of tabs are closed out once the lights go up.

“Once a show is over, it was a challenge for us to enable people to pay fast enough that they weren’t upset,” said David Richter, general manager at City Winery. “This is a way for us to respect their time.”

Richter has also found value in the ability to interact more directly with customers, who attach their email addresses to their profiles.

“If someone has an unfavorable experience, you can reach out to them immediately,” he said. “Before, you had to wait around to see it turn up on Yelp.”

Each bill includes a QR code that, when scanned with a phone or tablet, instantly brings up the online tab—a quicker alternative to pulling up a site on a browser. While it’s possible to hand customers just the QR code, Finley said they learned that customers like the format of the bill and feel more comfortable having the code at the bottom.

As a subway passed below the restaurant, starting the bar’s empty wine glasses jingling, Finley held up an iPad Mini to show how quickly a bill can be reconciled.

“They can tag the QR code, set the tip and tear outta here.”