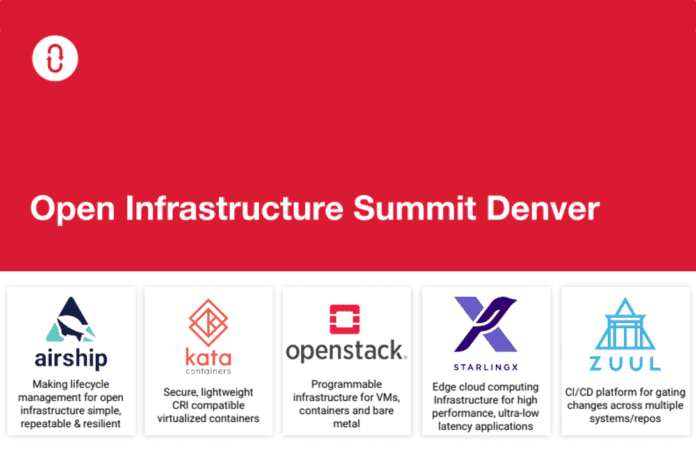 The OpenStack Foundation is continuing to grow its open-source efforts, including confirming new top-level projects and expanding its Ironic bare metal program, as part of the kickoff for the Open Infrastructure Summit.

The Kata Containers secure container effort and the Zuul Continuous Integration/Continuous Deployment (CI/CD) projects have now been confirmed as top-level projects at the OpenStack Foundation, joining the group’s namesake OpenStack cloud. While not yet a top-level project, the Airship lifecycle management project is also celebrating a major milestone with its 1.0 release.

Additionally, the OpenStack Foundation is promoting its Ironic bare metal program as a way for organizations to deploy cloud resources on physical hardware.

The Open Infrastructure Summit runs April 29-May 1 in Denver and is the first OpenStack event to officially carry that name, as an evolution of the former OpenStack Summit.

“In a modern cloud, you have more than OpenStack almost every time,” Mark Collier, chief operating officer of the OpenStack Foundation, told eWEEK. “If the point is to run your infrastructure as open-source, and we want to have an event about it, then the event really should probably have a name that is a little bit broader. So that’s why we renamed it.”

At the final OpenStack Summit event, which was held in Berlin, Germany, in November 2018, the open-source organization discussed its intentions to rename its flagship event as part of a broader focus on open infrastructure and not just the core OpenStack cloud platform.

The core OpenStack platform was created in 2011 as a joint effort between Rackspace and NASA and has steadily grown in the years since. The Open Infrastructure Summit follows the OpenStack Stein release that became generally available on April 10.

When OpenStack first started, deployment and management of virtualized compute resources, via the Nova project, was the primary use case. In the intervening years, a strong use case has emerged for organizations that want and need to directly manage and deploy cloud resources onto bare metal hardware, which is where the OpenStack Ironic project fits in. Ironic debuted alongside the OpenStack Kilo platform release in April 2015.

Now in 2019, the OpenStack Foundation is promoting Ironic as part of an effort to boost adoption. During the Open Infrastructure Summit, there will be multiple demonstrations of bare metal deployments.

Among the projects that are part of the OpenStack Foundation, beyond just the OpenStack platform itself, are Airship lifecycle management, Kata containers, StarlingX edge computing and Zuul CI/CD. At the Open Infrastructure Summit, the Foundation is announcing that Kata Container and Zuul have now both been officially identified as “confirmed” projects.

Collier explained that projects join the OpenStack Foundation as pilot projects and then are considered for Confirmation status after they have demonstrated an open governance model and have delivered at least one stable release.

One of the projects that has not yet been confirmed is Airship, which is announcing its 1.0 release at the Open Infrastructure Summit. Airship is an effort that was originally developed by AT&T, which is using the open-source technology to help with its 5G wireless deployment effort.

Collier added that Airship is also useful for those organizations that are using the combination of OpenStack and Kubernetes for cloud-native application deployments.

“The Airship 1.0 release has 17 companies contributing, and it’s already much broader than just an AT&T thing,” Collier said. “Airship is really about enabling in a very repeatable way, a secure way to automate infrastructure and continuously upgrade what’s running all the way out to the edge in a way that doesn’t require human intervention.”

While the Open Infrastructure Summit is about the broader world of cloud development, the core OpenStack platform itself will still be a topic of discussion. The next major release of the core OpenStack cloud platform is code-named Train and is set for general availability in October.

At this early stage in the development of OpenStack Train, Collier identified a few key trends that he expects to see.

“I think that we’re going to continue to see the focus on automated operations and further efforts for container integration,” he said. “We’ll also be working hard to make sure that the way OpenStack Train is developed doesn’t break other projects, and vice versa.”