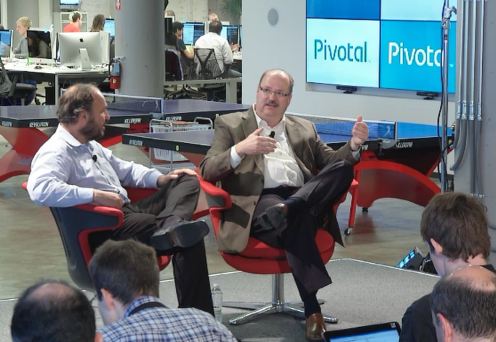 It sure looks like Pivotal Labs has purposely dragged out its debut in the enterprise platform as a service (PaaS) business.

The San Francisco-based software company, whose project management tool, Pivotal Tracker, is currently used by about a quarter-million developers around the world, was acquired by storage and data protection giant EMC and VMware in March 2012. EMC then introduced former Microsoft, VMware and EMC executive Paul Maritz (pictured at left) as Pivotal’s new CEO last fall.

Finally, the company revealed to eWEEK on April 2 that it planned a relaunch; the staged official launch event then happened April 24.

Wait, there’s more. Also on April 24, the company announced a $105 million investment—a 10 percent ownership stake—by 130-year-old General Electric, which plans to use Pivotal’s PaaS platform to build and deploy hundreds of new Web-based analytics services for its customers. Platform as a service is the delivery of a computing platform and solution stack as a service via the Internet.

GE said it will work with Pivotal on research and development on the new applications and that its investment aligns with what it calls the “Industrial Internet.”

That’s a lot of preview-type news made by a company whose commercial PaaS application isn’t even available and won’t be ready for prime time until the fourth quarter of this year. No matter; parents EMC and VMware are patient types and will wait as long as it takes to make sure everything works the way it should before it hits the streets.

“The Industrial Internet is the next phase of the Web, as we see it,” GE Vice President of Global Software Bill Rue (pictured at right) said at the launch event. “It’s all about the development of industrial-strength services to process big data workload analytics done more efficiently.

“Last decade was all about the consumer Internet; this decade is about the Industrial Internet,” he said.

Maritz said that Pivotal brings newly developed capabilities to a new generation of data fabrics that can’t be serviced effectively by current IT offerings.

‘When Fabrics Change, Everything in IT Changes’

“History teaches us that when the data fabrics change, just about everything else in our industry changes,” Maritz said. “Large-scale agile analytics requires PaaS that merges applications and data. That’s what Pivotal will provide.”

No company has put all of the PaaS pieces together into a single platform, Pivotal Senior Vice President Scott Yara said.

“Applications need to be instantly instrumented for data capture and analytics,” said Yara, a co-founder of the Greenplum analytics company, which EMC also owns. “With this, it is easy to move your services around between development, test and production—private or pubic.”

Pivotal has repositioned its business under the new owner to be a potentially powerful competitor to Amazon Web Services and a number of smaller service providers. Maritz has been tinkering with the company, identifying new business values and setting new goals for the last seven months.

EMC acquired the Web services startup in March 2012 for terms that weren’t specified at the time. Businesswise, Pivotal is something akin to VCE (for Virtual Computing Environment), an independent virtualized systems startup founded in 2009 and backed by powerhouses Cisco Systems, EMC, Intel and VMware.

Pivotal Tracker is currently used by about 250,000 developers around the world. EMC has continued to invest in Pivotal Tracker to build out its capabilities, and now it believes Pivotal is ready to challenge the big guys in the Web services space.

This not only means AWS, of course, but other established players such as Rackspace, GoGrid, Joyent, Microsoft Azure, IBM BlueCloud, Dell Cloud and HP Cloud.

Pivotal has brought in developers from both EMC and VMware—including a whole EMC group specializing in predictive data analysis and another that develops software applications for cloud computing.

In a letter to Pivotal employees, Maritz described the company goal: “to enable customers to build a new class of applications, leveraging big and fast data, and do all of this with the power of cloud independence.”

Naturally, the idea is for customers to run their Pivotal clouds using EMC storage and VMware “cloudware.”

“Pivotal is giving the smartest guy in the room all the stuff you have that you don’t know what to do with and letting him/her figure it out,” Duplessie wrote in a tweet.

Gartner Weighs in on Pivotal

Gartner Research in a media advisory said that although the general direction of the company is promising, “some notable components that are essential to a comprehensive cloud computing platform are missing.”
These, Gartner said, include an integration technology. “Integration of data, applications, cloud and Web services, partners and event streams is an essential element of any such environment. Pivotal will find that its customers demand that capability,” the researcher said.
“The vision for Pivotal platform rightly highlights rapid application development as a key required characteristic. Yet, the current composition of technologies does not include a high-productivity development platform,” Gartner said.
“The foundation of Pivotal’s application platform, the CloudFoundry CEAP and PaaS, is using a cloud-basedmodel of elasticity, preserving compatibility with many enterprise Java applications. Offering Java or Ruby frameworks as the primary programming model is a far cry in productivity from the cloud-native metadata-driven application PaaS (aPaaS).”
When IT leaders talk about a platform for the next-generation applications, the discussion often circles around the Nexus of Forces: cloud, mobile, social and information derived from big data analytics, Gartner said. “Pivotal has put stakes in the ground for the cloud and information initiatives, but social and mobile are still to be integrated into the vision and the product,” the researcher wrote.
“Without the social and mobile technologies, Pivotal will not only be unable to support some of the most active areas of recent innovation, but also will not discover the capabilities that arise in the nexus, from the relationship among the four forces. An application infrastructure company in 2013 can hardly claim the mantle of an innovator without an investment in all four components of the Nexus of Forces,” Gartner said.