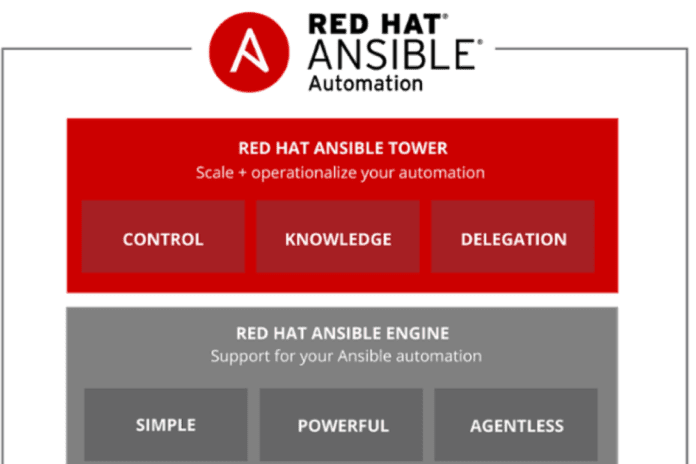 Red Hat announced the general availability of Ansible Tower 3.4 on Jan. 9, providing enterprises with updated capabilities for automating workflows on-premises and in the cloud.

Among the new capabilities in Red Hat Ansible Tower 3.4 is increased scalability with a job slicing feature that enables workloads to be more distributed. Security has been enhanced with a new mode providing support for the Federal Information Processing Standard (FIPS 140-2) security certification. Additionally, new modes for workflows have been integrated, including nested workflow to enable advanced orchestration scenarios.

“Before you could only use individual playbooks in a workflow,” Bill Nottingham, product manager for Ansible Tower at Red Hat, told eWEEK. “By adding the ability to nest workflows, you can now reuse deployment workflows easily in different contexts or for different environments, combine workflows from different teams into a master deployment workflow and more.”

Ansible Tower is a management platform for automation activities, defined by the Ansible Engine. The concept of playbooks is core to how Ansible works, defining a set of actions and activities and how they should be operated.

“Working upstream in AWX has allowed us to iterate more quickly over features with a shorter feedback cycle,” Nottingham said. “This allows us to ship features at a higher level of quality faster, as each feature has undergone changes over time in AWX as we develop.”

In addition to the nested workflows capability, Ansible Tower 3.4 also integrates a new workflow convergence feature. Nottingham explained that with workflow convergence, individual jobs within the workflow can be combined in new ways, such that tasks can be defined to be dependent on multiple previous workflow tasks.

“This is all done in the graphical workflow editor and is also available via the REST API,” he explained.

With Job Slicing in Ansible Tower 3.4, Red Hat is looking to provide increased scalability for the automation platform. Using Job Slicing, jobs can be run across tens of thousands of machines as necessary.

“Previously, the size of jobs that you could run would be limited by the size of the Ansible Tower cluster node executing the job, in terms of CPU and memory usage,” Nottingham said. “Utilizing Job Slicing now allows you to run as many slices as necessary across your tower cluster.”

Red Hat is now providing its customers with a FIPS-compliant mode to operate the Ansible Tower 3.4 platform. The FIPS 140-2 security certification defines standards for allowed encryption algorithms and processes used by software.

Looking forward, Nottingham said there are a variety of areas that Red Hat is looking at to improve Ansible Tower in 2019 and beyond. He said Red Hat wants to make it easier for its customers to adopt automation regardless of skill level. Additionally, Red Hat is looking to make it easier for automation to work with the tools and processes that its users already have.

“We want to continue to enable enterprises to perform automation at scale,” he said. “We also want to use the predictive analytics capabilities of Red Hat Insights to help bring insights to our customers’ automation.”