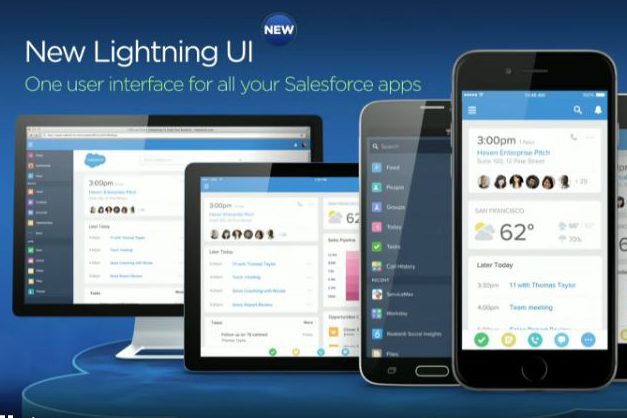 Salesforce, which has been all about mobile apps for most of its existence, is now offering tools and templates for building company- and industry-specific apps for smartphones and tablets. One of the more important notes here is that the tools and templates are not necessarily designed for use by developers.

Salesforce1 Lightning, introduced by company co-founders Marc Benioff and Parker Harris Oct. 14 on Day 2 of Dreamforce 2014, was described by Benioff as “the fastest way to build mobile apps.”

The platform, which has more than 400 objects from which to choose and a list of pre-configured templates for commonly requested app types, uses point-and-click, drop-down menus and drag-and-drop methodology to construct apps simple or complex.

The apps then run on Salesforce1’s cloud for Android, iOS, BlackBerry and Windows mobile devices, so connecting the apps to networks is work already done by the company’s own developers.

“Developers and LOB (line-of-business) users can now create purpose-built apps for devices with screens of every shape and size—desktops, laptops, tablets, phablets, smartphones and wearables,” Harris, who runs the development group at the company, said onstage in demonstrating the toolkit. “Lightning’s UI (user interface) delivers a consistent user experience across every Salesforce app and is optimized for any device.”

What’s going to become of software developers within an enterprise, if LOB users–such as sales, marketing and executive people–can sit down and set up an app in a short while? Worry not, folks; there still will be plenty of opportunities to create–and to fix–apps put together by non-developers.

Key features of Salesforce1 Lightning include:

—Lightning Framework: This is the same framework Salesforce’s internal development team uses to build apps. It also can be used to build custom Lightning Components and create any user experience.

—Lightning Components: Customers can use components pre-built by Salesforce, such as feed, list, chart, search, navigation and many more, components built by partners, or build their own custom Lightning Components. Some 25 salesforce partners, including Clerisoft, Plumsoft, Skuid and the TAS Group, are building new Lightning components, such as list views, keypads, case layouts, influencer charts and maps with real-time data, and making them available on the Salesforce AppExchange.

—Lightning Process Builder: The Lightning Process Builder allows anyone to build enterprise workflows and visually automate complex processes. It is used to build in daily activities, such as sending follow up email reminders, submitting pricing approval requests and assigning tasks, to more complex processes, such as employee onboarding, vendor procurement and order fulfillment.

—Lightning Community Designer: This component is used to build communities that connect customers, partners and employees.

“Our customers expect to have their app needs met before they know they have a need,” said Sandra Kurtzig, Chairman and CEO of cloud ERP provider Kenandy.

Salesforce1 Platform is now generally available and included with all user licenses of Salesforce CRM.