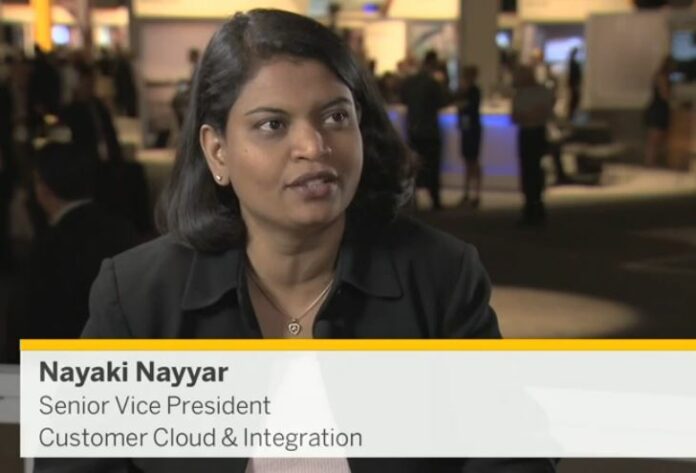 SANTA CLARA, Calif.—There are apparently no quick and easy names to attach to an IoT platform, and some of the world’s biggest IT product-and-service providers are finding this out firsthand.

The latest news from IoT World/AppsWorld was from SAP on May 12, where the company revealed new capabilities and partnerships for its home-built platform where all roads lead to its in-memory HANA database.

Extending Capabilities of HANA Database
SAP’s IoT data management product is a set of capabilities that extends what the HANA solid-state database can do in concert with its Vora software in order to specifically address the requirements of diverse IoT applications.

SAP Senior Vice-President of Customer IoT and Integration Nayaki Nayyar (pictured), who heads up SAP’s go-to-market team after spending 15 years in the oil-and-gas exploration world, told eWEEK that the emergence of the IoT is the first real instance that IT (information technology) and OT (operations technology) are converging “on the shop floor.”

“The IoT is all about connecting to where things are really happening, bringing the data, analyzing the data and making decisions on it,” Nayyar said. “It [the IoT] is about how IT relates to the OT layer. I’ve seen how these two worlds were segregated—not just from tech and systems, but even culturally. They are very different cultures on how they are operated and managed and literally cordoned off. You could not get into the OT layer [of a manufacturing plant] without the plant manager giving you authorization, for example.

“We needed to define this [OT and IT] very carefully, because at SAP we wanted to be very practical about where SAP would focus our engineering efforts and our solutions, and where we would partner.”

This is indeed what SAP is doing with this new platform. It also is partnering with Dell, OpenStack, Cloud Foundry, Siemens and Hitachi to bring more functionality to the table.

The platform features controls in edge computing, connectivity management, device management, mobile enablement, dashboarding, analytics and predictive computing. Siemens MindSphere already has been sanctioned for operating on SAP HANA Cloud Platform; OpenStack is supported for the cloud infrastructure and Cloud Foundry as the open-source framework for the cloud platform.

The newest IoT offerings include:

—Dynamic tiering manages multitier database storage according to the value of the data to lower cost in Big Data scenarios. HANA Vora transforms Big Data analysis with an in-memory computing engine for Hadoop. Also included in the bundle is the IoT SIM management connector for HANA, which allows cellular IoT device connectivity management with a user interface based on the SAP Fiori user experience.

—The IoT intelligent edge processing bundle for HANA offers a set of tools that run at the edge of the network to complement the IoT foundation for HANA. These capabilities consist of a streaming component, the edge database and sync client, and SAP’s own Plant Connectivity software.

Dell and SAP are also collaborating on models designed to address the industry’s biggest operational challenges, such as business continuity, overall equipment effectiveness, maintenance costs and return on assets. By combining Dell’s intelligent Edge Gateway 5000 with SAP solutions for the IoT, users can extend their digital core to the edge to gain real-time insights.

SAP and Hitachi announced an expanded global collaboration to create and customize industry-specific IoT solutions for a range of applications, particularly around the areas of smart manufacturing, smart city, transportation and logistics.