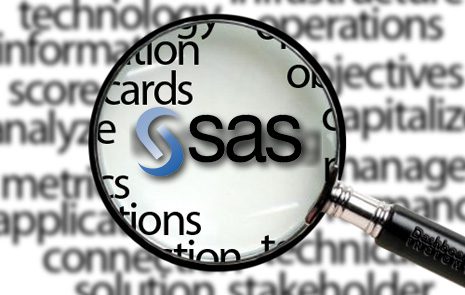 SAN FRANCISCO—SAS, the world’s largest independent business intelligence provider, updated its frontline analytics engine April 29 with a new version that can be deployed in several ways: in public or private clouds, hosted by SAS or via on-premise software.
The announcement of SAS Business Analytics 9.4, the foundation for all SAS products,
was made at the podium of the SAS Global Forum here at Moscone Center, which continues through May 1.

SAS, based in Cary, N.C., launched its in-memory-based, graphical user interface analytics toolbox last year. The company, which has been providing business analytics software for enterprises since 1976, uses its own analytics, in-memory architecture, intuitive data exploration, Hadoop support and information-delivery options in the Business Analytics product.

“A huge emphasis of this release is cloud enablement,” Randy Guard, vice president of product development at SAS, told eWEEK. “This means deployment through public cloud, private cloud or a hybrid of both. This is foundational. We also wanted to simplify it—to make it easier for both the users and for IT to manage it—and to innovate, since we go all the way to the core level to do visual analytics.”

The drag-and-drop-style SAS Visual Analytics also has iOS and Android apps for use on iPads and other tablets.

SAS Visual Analytics, the latest version of which will be released in June, has added new scenario-analysis capabilities and prescriptive analytics to existing descriptive and predictive analytics.

Scenario analytics enables a business analyst to look deeper at a sales forecast, for example, and query the software with a question like “What are the attributes that might influence the forecast?”

“This then tells you what actually is driving your business forecast,” Guard said.

SAS Visual Analytics is one of the first products to build on the SAS 9.4 foundation and take advantage of the new cloud deployment, Guard said. As the number of SAS Visual Analytics customers continues to grow—now more than 200 worldwide—so does the demand for new features. This latest release of this data visualization software, the third in just over a year, includes a wide range of upgrades.

Key enhancements in SAS Visual Analytics include the following:

“You can run this in Amazon [Web Services], in your private cloud; you can install it on-premise [using any type of standard enterprise server] as a quote, unquote ‘normal install,'” Guard said. “We just want to make it easy. You pick the spot: public, private or traditional on site, and we’ll support them all.”

Go here to view a demo.