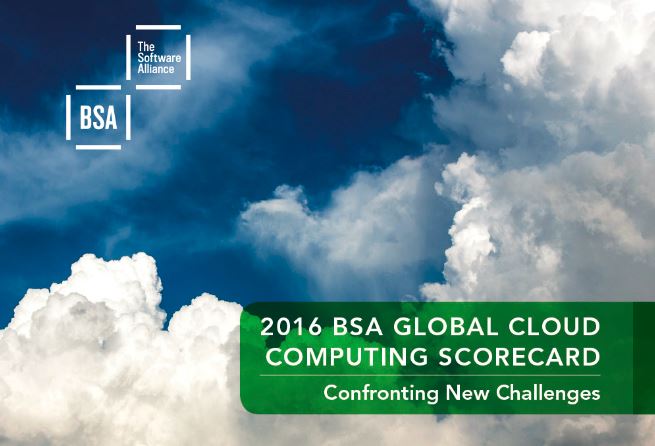 Ranking the cloud friendliness of entire countries appears to be a daunting task, but that didn’t stop one international software advocacy group from quantifying an esoteric subject.

National governments continue to make significant strides in improving the legal and regulatory environment for cloud computing around the globe, but important exceptions exist in several countries that threaten to impede economic growth in those markets, according to a study released by BSA (The Software Alliance).

The 2016 BSA Global Cloud Computing Scorecard, released April 26, ranks the cloud-computing market readiness of 24 countries that account for more than 80 percent of the world’s IT markets. Each country is graded on its strengths and weaknesses in seven key policy areas.

The Washington, D.C.-based BSA (The Software Alliance) is an advocate for the global software industry before governments and in the international marketplace. It is a trade group established in 1988 that represents a number of the world’s largest software makers and is a member of the International Intellectual Property Alliance. Its principal activity is to stop copyright infringement of software produced by its members.

Founded as the Business Software Alliance, it dropped the “Business” in October 2012 and refers to itself as BSA | The Software Alliance. With operations in more than 60 countries, BSA offers compliance programs that promote legal software use and advocates for public policies that promote technology innovation and drive growth in the digital economy.

“The report is a wakeup call for all governments to work together to ensure the benefits of the cloud around the globe.”

Cloud computing allows anyone—a start-up, an individual consumer, a government or a small business—to quickly and efficiently access technology in a cost-effective way. These services in return often open the door to improved connectivity, productivity and competitiveness.

This year’s results reveal that almost all countries have made healthy improvements in their policy environments since the release of BSA’s last Scorecard in 2013. But, the report notes, the stratification between high-, middle- and lower-achieving country groups has widened, with the middle-ranking countries stagnating even as the high achievers continue to refine their policy environments.

Notably, the countries that usually rank near the bottom—No. 21 Thailand, No. 22 Brazil and No. 24 Vietnam—continue to make significant and consistent gains and are closing their gap with mid-tier countries. The world’s major IT markets remained stable with modest gains.

The full, 24-country rankings and detailed findings are available here.