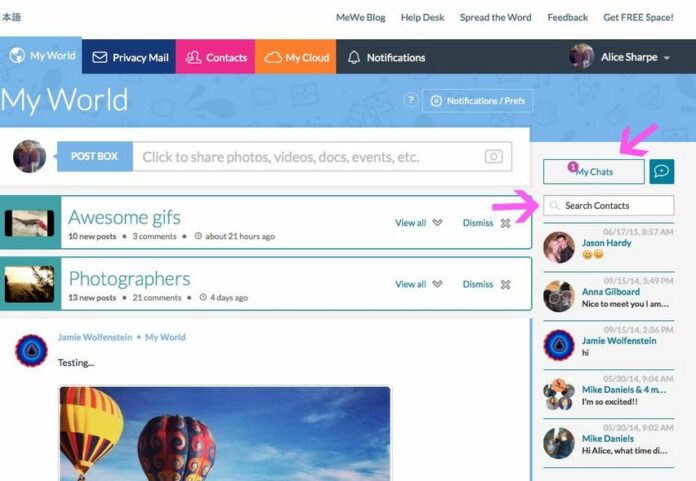 There are excellent reasons why social networks, such as Facebook, LinkedIn, Instagram, and Twitter, have multiple millions of daily users: Reason No. 1 is that they deliver great value to global audiences; No. 2, of course, is that they cost little or nothing to use.

They represent that classic Information Age business trade-off: You get social network value in exchange for the use of your personal information, most often in aggregate, for advertising and marketing purposes. Obviously, most people are okay with that; some are not as comfortable. But there’s always that shadow of a doubt about whether your personal information is completely secure and that the network and its advertisers aren’t looking over your shoulder 24/7.

What if you could use a network like Facebook, LinkedIn or Twitter, yet not have to face that trade-off? And if that network was free of charge, would that be an inducement to use it? Um, that’s likely.

MeWe, a new network engineered with its users’ data privacy built in, is betting that a lot of people will say yes to both of those questions. The Mountain View, Calif.-based startup, whose parent company is Sgrouples.com, launched its freely available social network out of beta March 9 with more than 200,000 members already using it.

No Ads Anywhere to Be Found

MeWe is not in the advertising business. It operates a freemium model: basic social networking services cost nothing; small monthly fees are charged for added features, such as encrypted messaging, disappearing content and voice messaging.

“Our members are not for sale,” founder and CEO Mark Weinstein told eWEEK. “We are debunking the myth that a Web company has to spy on and track members to make money. MeWe has an excellent revenue model and respects its members as the partners and customers they are and not products to be sold to advertisers.”

MeWe is free of data tracking, facial recognition, spying and stalking and is available as a native app for iOS, Android, and desktop.

MeWe isn’t a startup with unknowns running it. Sir Tim Berners-Lee, co-architect of the World Wide Web, found out about MeWe on his own and approached the company about getting involved. Berners-Lee, one of the most respected new-gen IT thought leaders in the world, is now a member of the MeWe advisory board.

“Tim discovered us. He was so outraged [about the loss of personal data privacy in general] that he has become a MeWe advisor and shareholder, and he joined our beta project,” Weinstein said. “We are very honored that Tim Berners-Lee is with us.”

“The power to abuse the open Internet has become so tempting both for government and big companies,” Berners-Lee said. “MeWe gives the power of the Internet back to the people with a platform built for connection, collaboration and privacy.”

Weinstein himself is a known personality. He has authored several books on personal success (“Habitually Great: Master Your Habits, Own Your Destiny,” 2008) and other topics; he also has been way ahead of the curve in the social network business. Before Facebook, MySpace and Friendster were on the Web, he founded pioneering networks SuperFamily.com and SuperFriends.com in the late ’90s.

All a prospective MeWe member needs to do to register for the network is supply his/her name, email address, gender, birthday and a password. If he or she is already a member of the Google, AOL or Yahoo networks, the user can defer to information already recorded online.

Supply your own photo if you like, and off you go on MeWe.

MeWe features, according to Weinstein, include:

In February 2016, MeWe surveyed more than 1,000 students on 25 U.S. college campuses and asked them if they knew that social media and third-party advertisers collect and own their data. “Sixty-five percent of students responded: “WTF? This has to stop!” Weinstein told eWEEK.

Thus, MeWe is aiming its service directly at millennials. According to a January 2016 Pew Research Report, millennials are the demographic most concerned about their online privacy and their personal information being monetized.

“MeWe uses a chat app that emphasizes social sharing with privacy-by-design (PbD). We’re the only social network with a ‘Privacy Bill of Rights’ for its members,” Weinstein said.

MeWe was selected as a finalist in the Innovative World Technologies division of SXSW’s eighth annual Accelerator competition this week in Austin, Texas.

Weinstein also said the company has completed a $3 million Seed III round of funding at a $20 million valuation, bringing MeWe’s total funding to date to $4.8 million. MeWe is currently offered in six languages.

You can watch a video about MeWe here.