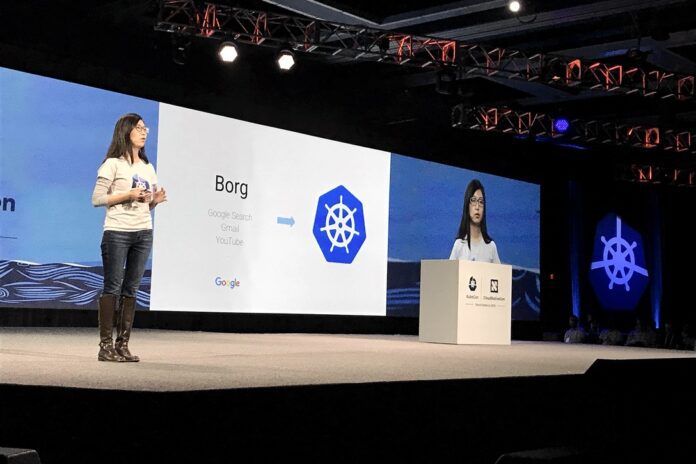 SEATTLE—In recent years, the Kubernetes container orchestration system has received more than its fair share of hype as the next big trend in IT.

That hype was pervasive across the show floor and packed session rooms of the KubeCon + CloudNativeCon NA 2018 conference that concluded on Dec. 13 here. More than 8,000 attendees and 187 vendor exhibitors gathered to talk about and show off the latest Kubernetes technologies (for more information on some of the news from event, check out the eWEEK Data Points announcement wrap-up article). But why is Kubernetes technology so popular, and does it have practical utility beyond the hype?

That’s the question that Google engineer and conference co-chair Janet Kuo answered during her keynote on the final day of KubeCon.

For the uninitiated, Kubernetes provides a platform that enables anyone to run clusters of containers at scale, including deployment and management capabilities. Kubernetes is currently supported as a hosted service on all three major public cloud providers—Google, AWS and Microsoft Azure—and has a broad system of vendors that also provide Kubernetes distributions that can run on-premises or in the cloud.

Reason No. 5: Built on a Decade of Experience

The first code commit for Kubernetes was made by former Google engineer Joe Beda in June 2014. In a video interview with eWEEK in June of this year, Beda reflected on the four-year history of Kubernetes and how far it has come in that time. While Kubernetes itself is only 4 years old, it has its roots in the Google Borg project, which got started a decade ago.

“Google has been running containers in production for over a decade, and Google uses Borg to power its intensive online services like Google search, Gmail and YouTube,” Kuo said. “So even though Kubernetes is still very young, it can leverage the lessons learned and the best ideas from Borg.”

Multiple tools have been built to make it easy for new users to get started with Kubernetes. For example, Kuo highlighted the minikube tool that enables users to get a Kubernetes cluster up and running on a local notebook computer in minutes.

Reason No. 3: Declarative API and Automation

At its core, Kubernetes contains a set of APIs that provide abstraction layers for different types of platform capabilities. One key principle of Kubernetes, according to Kuo, is it is very API-centric and the API is declarative, rather than imperative. An imperative API is a more manual approach to driving a technology and requires more effort and interaction from a developer, she said. In contrast, a declarative API is like an autopilot system.

“With an imperative API, you need to tell the system each single step that you want to do to accomplish a task,” Kuo said. “With declarative, you can just declare what the final state you want the system to accomplish without telling you how to do it.”

While Kubernetes was born at Google, it is not tethered to Google and it can run anywhere, be it an on-premises server or a cloud data center.

“Kubernetes provides a convenient abstraction layer over infrastructure,” Kuo said. “So it is possible to run Kubernetes in all sorts of different environments, and it’s also very easy to move Kubernetes from one environment to another.”

Kubernetes became the anchor project of the Cloud Native Computing Foundation (CNCF) in June 2015, and it benefits from the contributions and participations of a multi-stakeholder community.

“Kubernetes has a very strong community and one of the largest the most active open-source communities, now with thousands of contributors,” Kuo said. “In the Kubernetes community, there’s no concentration of power and there’s no single vendor influence. This makes the community open and collaborative.

“Competitors come together to contribute to Kubernetes and because everyone can contribute, this enables innovation,” she said.

While there are at least five good reasons why Kubernetes is doing well, Kuo also outlined areas of improvement for Kubernetes. In her view, there needs to be a focus on quality as well as continued improvements for the Kubernetes user experience. Looking forward, there is also a need to provide better enterprise security as well as scalability features.

“Clearly, Kubernetes has lived up to its hype and we don’t need more hype,” Kuo said. “We need to work together as a community to sustain Kubernetes’ success by continuing to invest in quality, user experience and conformance.”