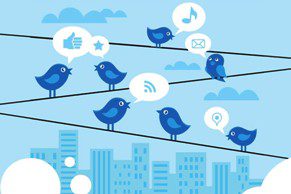 Twitter has been a publicly traded company for 14 months, and while it continues to immerse itself into the 21st-century culture as a go-to social network, it is still spinning its wheels in the financial department.

The San Francisco-based messaging giant reported its quarterly and fiscal-year 2014 results Feb. 5, revealing significant improvement in Q4 revenue (at $497 million, it was up a whopping 97 percent year over year) but nonetheless posting a quarterly net loss of $125 million after all the bills were paid.

The fiscal-year 2014 numbers were equally bidirectional. Twitter recorded 2014 total revenue of $1.4 billion, up an impressive 111 percent year-over-year. But it also showed a net loss of $578 million.

Nonetheless, the social media company beat Wall Street’s profit and revenue targets in the fourth quarter, which helped its stock to gain 9.2 percent to $45.05 in after-hours trading. The stock had closed at $41.26, up 1.3 percent.

Twitter added 13 million to 16 million users in each of the first three quarters of 2014 and was on track to hit a similar number in the current quarter, it said. That compares with a rise of about 4 million in the fourth quarter to 288 million monthly users as of Dec. 31.

Investors are eagerly awaiting the day when revenue for the 9-year-old company finally overtakes expenses, investments and capital costs, and the numbers turn to black. But that day appears to be a ways off.

Income hasn’t been the problem; the company has doubled its revenue in each of its first four public quarters. Cost containment and escalating operating and capital expenses appear to be the main culprits, and CEO Dick Costolo has been under fire for a long time for this.

“We closed out the year with our business advancing at a great pace. Revenue growth accelerated again for the full year, and we had record quarterly profits on an adjusted EBITDA basis,” Costolo said. “In addition, the trend thus far in Q1 leads us to believe that the absolute number of net users added in Q1 will be similar to what we saw during the first three quarters of 2014.”

Twitter reported that it ended Q3 2014 with 284 million monthly active users; that was an increase of about 5 percent from the previous quarter. Wall Street analysts generally aren’t optimistic that the company can reverse this slowdown, so they have reduced expectations for the fourth quarter.

Analysts have estimated the number of Twitter users will tick up by only about 3 percent to 292 million in Q1 2015. If that plays out, it would be the smallest quarterly gain in Twitter’s history—something investors certainly don’t want to see happen.

Twitter’s draw is largely based on its continual scale-out to larger audiences.

The company, which invented the 140-character message and made it a signature item, has expanded its services in significant fashion in 2014, and it wasn’t inexpensive to do so. Two weeks ago, Twitter launched two new features: private chatrooms and a service that allows users to find, edit and share videos.

Up to now, Twitter subscribers only could aggregate public discussions into Tweetchats—using hashtags or live chat sites such as Tweetchat.com or Tchat.io—in which an unlimited number of people could participate in a discussion.

More additional features are expected to be introduced in 2015.