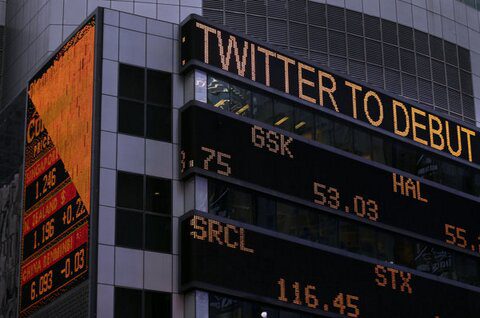 Twitter’s stock debuted Nov. 7 on the New York Stock Exchange an astonishing 75 percent higher than its $26 IPO price, valuing Twitter at $46 per share on Day 1 and, for at least the time being, at more than $31 billion.

Twitter’s trading debut was the most highly anticipated in any sector since Facebook’s on May 18, 2012. Twitter trades under the ticker symbol “TWTR.”

It was a busy week for IT stocks, with online Website creation service Wix.com (WIX, Nov. 5) and storage specialist Barracuda Networks (CUDA, Nov. 6) also going public, with varying results. Both companies stayed flat at about $16 and $20, respectively, early in their public tenures.

First Set of Investors Got in at $26

Twitter’s initial public offering of stock at $26 per share, set in a private offering on Nov. 6, had valued the company at more than $18 billion based on its outstanding stock, options and restricted stock that will be available after the IPO. The short messaging social network raised a total of $1.8 billion in the offering, prior to expenses.

Twitter has come a long way since its incorporation in 2006 and product launch in 2007, despite not yet turning a profit. In its prospectus revealed Oct. 3, Twitter reported a net loss of $79 million last year and $69 million for the first half of 2013. Even after adjustments for stock option compensation, depreciation and other items, the company still has suffered steady losses during its years as a private company.

Nonetheless, due to its growing worldwide influence, a steadily increasing list of users and an effective advertising reach, most analysts believe Twitter has a bright future.

“Twitter has a unique place in the social marketplace, one that represents real-time news and information, a global water cooler where people can talk about all manner of current events and happenings in a way that is totally out in the public where anyone can join the conversation,” Gartner analyst Brian Blau told eWEEK.

In its second quarter this year, Twitter reported 218.3 million average monthly active users, up a whopping 44 percent from a year ago. Revenue for the first half of this year was $253.6 million, more than double the first half of 2012, the filing reported.

Bloomberg News reported an estimate by eMarketer that the company will bring in $582 million this year from advertising. Twitter also makes money by licensing use of its aggregated data to other companies.