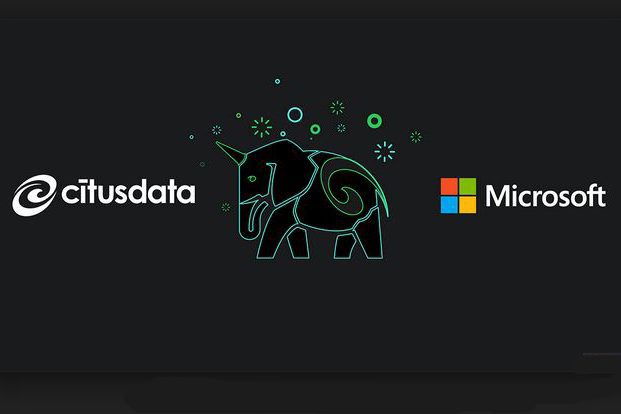 Microsoft has acquired Postgres specialists Citus Data as it continues to deepen its 2-year-old efforts to expand the use of the PostgreSQL database with the Microsoft Azure cloud platform.

The acquisition, announced by Sudhakar Sannakkayala, General Manager of Azure Data, in a recent post on the Microsoft Azure Blog, gives Microsoft another critical tool to continue its work with the database platform, he wrote. Citus Data is packaged as an extension to PostgreSQL, which transforms PostgreSQL into a distributed database, giving users faster performance for queries without having to re-architect existing applications, wrote Sannakkayala.

“Our objective since the beginning of our journey in bringing PostgreSQL database to Microsoft Azure has been to provide our customers with the best enterprise grade managed PostgreSQL service in the cloud,” wrote Sannakkayala. By using a community-based engine model, customers can use it without being locked in.

“PostgreSQL is one of the fastest growing open source relational database engines that is loved and embraced by enterprise developers. Citus Data complements Microsoft’s approach to community PostgreSQL with its innovative open source extension built on PostgreSQL.”

Using Citus Data’s technology, Microsoft will be able to offer customers increased performance and scale for their PostgreSQL databases on top of the intelligent and secure Azure Database for PostgreSQL, he added.

“We are very excited to welcome the Citus Data team to Microsoft and to build on the culture of contribution to the open source community,” he wrote. “We look forward to accelerating an open PostgreSQL and can’t wait to see how to see how this technology advances our customer’s business needs.”

The terms of the acquisition were not revealed by the two companies.

In a related blog post, Rohan Kumar, Microsoft’s corporate vice president for Azure Data, wrote that adoption of the database has surged since the launch of Microsoft’s fully managed community-based database service for PostgreSQL in March 2018.

“The acquisition of Citus Data builds on Azure’s open source commitment and enables us to provide the massive scalability and performance our customers demand as their workloads grow,” wrote Kumar. “Together, Microsoft and Citus Data will further unlock the power of data, enabling customers to scale complex multi-tenant SaaS applications and accelerate the time to insight with real-time analytics over billions of rows, all with the familiar PostgreSQL tools developers know and love.”

Citus is available as a fully-managed database as a service, as enterprise software, and as a free open source download.

“Microsoft is committed to building an open platform that is flexible and provides customers with technology choice to suit their unique needs,” wrote Kumar. “Microsoft Azure Data Services are a great example of a place where we have continuously invested in offering choice and flexibility with our fully managed community based open source relational database services, spanning MySQL, PostgreSQL and MariaDB.”

Microsoft has also been involved in an expanding variety of open source projects in recent years, including SQL Server on Linux, a multi-model NoSQL database with Azure Cosmos DB and support for open source analytics with the Spark and Hadoop ecosystems. In 2018, Microsoft acquired the GitHub open source code repository for $7.5 billion, further entrenching the company into the open source community.

Umur Cubukcu, the CEO and co-founder of Citus Data, wrote in a blog post on his company’s web site that the technology world was different when the company began eight years ago.

Scales Up and Out

Back then clouds and big data were just being discussed and the common perception was that relational databases were, by design, scale up only—limiting their ability to handle cloud scale applications and big data workloads, he wrote. Those needs inspired the rise of Hadoop and other NoSQL databases.

“At Citus Data, we had a different idea: that we would embrace the relational database, while also extending it to make it horizontally scalable, resilient, and worry-free,” he wrote. “That instead of re-implementing the database from scratch, we would build upon PostgreSQL and its open and extensible ecosystem.”

The company’s acquisition by Microsoft will allow that work to progress, he explained. “We are excited about joining forces, and the value that doing so will create: Delivering to our community and our customers the world’s best PostgreSQL experience.”