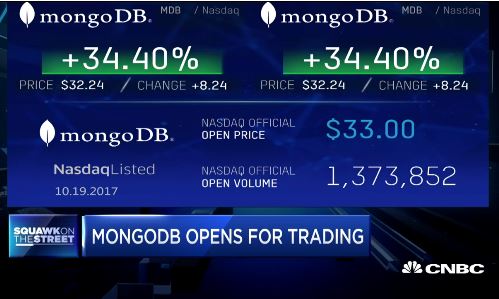 MongoDB, which has been among the most popular freely available open source NoSQL databases in the market for a decade, has taken its business to the public stock market on the Nasdaq Exchange, offering 8 million shares at $24 each the evening of Oct. 18.

It was a slam-bang successful debut; the oversubscribed initial public offering resulted in a $192 million bank deposit for the New York City-based company. Shares opened Oct. 19 at $33 apiece and closed at $32.07.

Karl Utermohlen of InvestorPlace published on Yahoo News the following data points investors should know about the company’s decision to go public:

Developers Show a Preference for MongoDB

Software developers favor MongoDB’s NoSQL database over most of the others, according to a recent survey by Stack Overflow of 64,000 developers. Competitors in this market include Oracle, Couchbase, Apache HBase, DataStax, MarkLogic, Amazon, Harper and several others.

MongoDB CTO and founder Eliot Horowitz took a few minutes off from his company’s day on Wall Street to talk to eWEEK.

When asked when he first thought about taking the company public, Horowitz told eWEEK: “You know, I don’t know that we ever thought about it (the company) at all in that way. I certainly never did. Our focus was on building a really good relational database product and a good company, so I never thought about going public or what that actually would mean.”

How will being a public traded company change MongoDB, if at all?

“Hopefully, very little, to be perfectly frank,” Horowitz said. “We took the last 10 years to focus on making great products and get them in the hands of customers, and I hope we do that for the next 10 years.”

“Databases are big and complicated, and we have a seemingly infinite list of things we want to do.”

The most important advantage of going public, Horowitz said, is “the visibility (that comes with it) and people understanding our company. When people are choosing a database, it’s a big decision on a technical level and a business level. It’s a good thing for us; people will be able to see how we’re doing and understand our business better.”

MongoDB is among the leaders in the NoSQL database market. Headquartered in New York City, MongoDB has more than 4,300 customers in 85 countries, including more than half of the global Fortune 100.

What Experts Had to Say

Joe McCann, the CEO of NodeSource, told eWEEK in a media advisory that “MongoDB’s IPO debut further validates the story, not only around open source technologies and their adoption by the enterprise but the vibrant commercial success of open source-focused businesses.

“Forrester Research points out that open source comprises 80 percent to 90 percent of the code in a typical application. All Fortune 500 companies today are utilizing open source technologies more and more and organizations, big and small, are building applications using open source as their foundation because it decreases costs while accelerating time to market. That’s where companies such as MongoDB, NodeSource, and GitHub come into play. MongoDB’s is a great example of the market continuing to see value and opportunity in open source technology and the commercial vendors who support it.”

“MongoDB’s IPO is further validation that one size does not fit all in data management. Today’s data is magnitudes more complex, and is growing at incredible speed, meaning that enterprises need to look beyond traditional relational databases to manage it. MongoDB has done considerable work in moving the database industry forward. Now, we are seeing real-time graph analytics develop as the next phase in this movement.

Ramin Sayar, CEO of Sumo Logic—a corporate partner of MongoDB’s–told eWEEK that “when you compare the tech IPO market over the last few years, 2017 has been a strong one for startups, and it is indicative of a larger shift in the industry — particularly with regards to cloud technology.

“Now more than ever, the shift to the cloud and industry-wide adoption of other emerging technologies has created an opening for companies like MongoDB to move beyond legacy companies and databases and capitalize on the complex and evolving requirements of business applications. We have passed traditional IT and entered into a new age of connectivity where business and technology are inseparable, and old-guard companies cannot keep up. We need to bring continuous automation, intelligence and analytics to every part of the development cycle to understand our customers and the evolving trends of business applications.”

The company also has partnered with visual analytics provider Tableau to announce MongoDB Connector for BI, which is now certified by Tableau as a named connector. Using this, DBAs can visually analyze rich, JSON-like data structures associated with modern applications directly in MongoDB Enterprise Advanced.