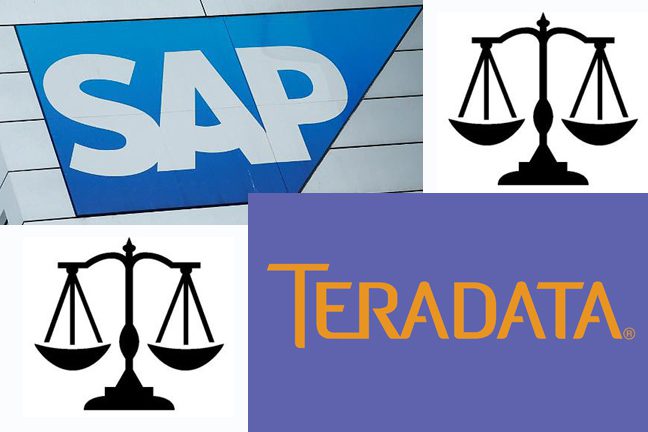 Dr. Vishal Sikka, who resigned from SAP in 2014, and SAP board chairman/company co-founder Hasso Plattner are the principals who developed HANA (which stands for high-performance analytic appliance), which has grown into a $2 billion business and is now SAP’s flagship product.

San Diego-based Teradata filed its complaint in the U.S. District Court for the Northern District of California against SAP SE, SAP America, Inc. and SAP Labs, LLC for “trade secret misappropriation, copyright infringement and antitrust violations,” according to the legal affidavit.

Teradata is known widely for its data warehouses but has been expanding its business to include data analytics software and services for the past several years. SAP had made its mark in enterprise middleware, conventional databases and other software for years until it made a breakthrough to revitalize its business with the fast HANA database in 2011.

Joint Development Deal in 2008 Started It All

The two companies entered into a joint development agreement in 2008. The litigation alleges that Germany-based SAP entered the venture with Teradata with the intent of gaining access to its intellectual property and creating a competing database product that it then tried to coerce its customers to use.

SAP said it was surprised by the Teradata complaint and said may issue a statement once it has reviewed the lawsuit, which seeks an injunction, unspecified damages and other legal relief available under the law.

“As set forth in the complaint, Teradata is alleging that SAP has engaged in a decade-long campaign of anti-competitive behavior, to the detriment of the parties’ customers and Teradata alike. SAP lured Teradata into a purported joint venture in order to gain access to Teradata’s valuable intellectual property. SAP’s purpose for the joint venture was to steal Teradata’s trade secrets, developed over the course of four decades, and use them to quickly develop and introduce a competing though inferior product, SAP HANA. Upon release of SAP HANA, SAP promptly terminated the joint venture, and SAP is now attempting to coerce its customers into using HANA only, to the exclusion of Teradata.

“Teradata supports competition and innovation in the data and analytics space. SAP’s conduct, however, is neither pro-competitive nor innovative. We believe seeking relief through legal action against SAP is a necessary step to protect the rights and interests of our shareholders and all of our other stakeholders, including our customers.

“Teradata is seeking an injunction barring SAP’s illegal conduct, monetary damages, and all other legal and equitable relief available under law and which the court may deem proper.”

No Word June 20 from SAP

Teradata filed the following data points in the complaint:

The court documents can be accessed here. Morrison & Foerster LLP is serving as legal counsel to Teradata.