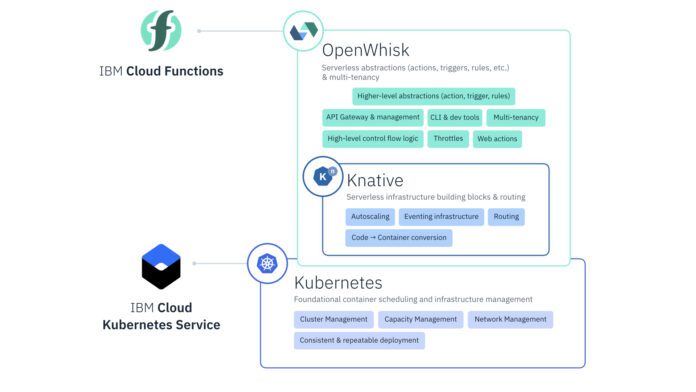 SAN FRANCISCO – A new IT baby was born July 24 at Google Next ’18 at Moscone Center. The newborn, along with parents IBM and Google and members of the open source community, were all said to be doing just fine post birth.

The new entity, an open source serverless cloud computing project, has been named Knative (pronounced kay-native). Knative, its parents say, has the potential to redefine how serverless computing can be used to build cloud architectures and expand the use of the serverless genre beyond mere functions.

When Knative grows up, it will serve as a bridge for serverless computing to coexist and integrate with containers atop Google Kubernetes in a cloud-native computing system.

Kubernetes is an open-source container-orchestration system for automating deployment, scaling and management of containerized applications. It was originally designed by Google and is now maintained by the Cloud Native Computing Foundation.

A Bridge to Connect Containers and Serverless Computing

Knative broadens the spectrum of applications that can take advantage of the real-time cloud access, minimal infrastructure concerns and scale that serverless architectures offer, IBM said.

Knative is expected to become a foundational component for serverless architectures that can take advantage of all types of cloud-native tools. For example, Knative could one day enable a developer to use Apache OpenWhisk to orchestrate all parts of a cloud app in a serverless fashion, such as running both containers and functions-as-a-service events, all on-demand and on an as-needed basis.

This could drastically expand the scope of how serverless tools such as OpenWhisk can be used, evolving beyond functions into a complete foundation for full-scale apps in production.

Knative Exemplifies the Power of Collaboration

“IBM Cloud is built on open technology, and we’re firm believers the future of cloud will be created in the open,” Jason McGee, an IBM Fellow and VP of IBM Cloud Platform said in a media advisory. “Knative is a prime example of the power of such collaboration.

“Combining what we’ve learned from the creation of Apache OpenWhisk, building serverless projects for enterprises, and our experience with Kubernetes and Istio, we plan to evolve Knative to bring serverless to a wider range of applications, developers and industries.”

Blair Hanley Frank, Principal Analyst at Information Services Group, a global technology research and advisory firm, had another take on the news.

“The capabilities Google Cloud unveiled today are focused on helping customers build and deploy modern applications that support the future of their business, beyond lifting and shifting virtual machines from private data centers,” Frank told eWEEK.

“It’s a strategy that helps Google capitalize on its perceived lead in containerization, artificial intelligence and developer tooling to attract new business from enterprise customers. However, it remains to be seen if that will translate into enterprises relying on those applications and moving other mission-critical apps to Google Cloud.

“It’s also important to remember that Google’s competition is a moving target. AWS, Azure and others are all constantly revising their existing services and launching new ones to better serve customers. Groundbreaking capabilities today are the table stakes of tomorrow. The true test of Google’s strategy is the extent to which it can keep up innovative service releases,” Frank said.

Knative is the latest initiative in IBM’s mission to advance how large companies can move to the cloud simply and securely, regardless of what their existing models look like. This strategy is paying off: Last week, IBM unveiled cloud revenues of $4.7 billion for the second quarter and $18.5 billion over 12 months–up 23 percent year over year.

Years ago, IBM bet that enterprises would adopt a hybrid cloud approach as the path to gain value from the decades of accumulated data sitting behind their firewalls and bridge it to the cloud. This opportunity is now being recognized across the industry: the hybrid cloud market is worth $90 billion (Gartner), and open technology is the key to unlocking it.

Open source has played a large role in that strategy. During the past 20 years, IBM has invested more than $1 billion in open-source initiatives, and more than 1,000 IBM engineers contribute to open-source projects monthly.

The company also is evolving cloud-native developer tools through projects such as OpenWhisk and Istio and advancing artificial intelligence and blockchain via Fabric for Deep Learning (FfDL) and the Hyperledger Project.

IBM said that its experience scaling open cloud architectures with tools such as Kubernetes and serverless enabled enterprises such as Maersk, American Airlines and the Australian government to migrate securely to the cloud and build key services on top of open-source technologies.

Editor’s note: To see a larger view of the image, right-click on it and select “View Image.”