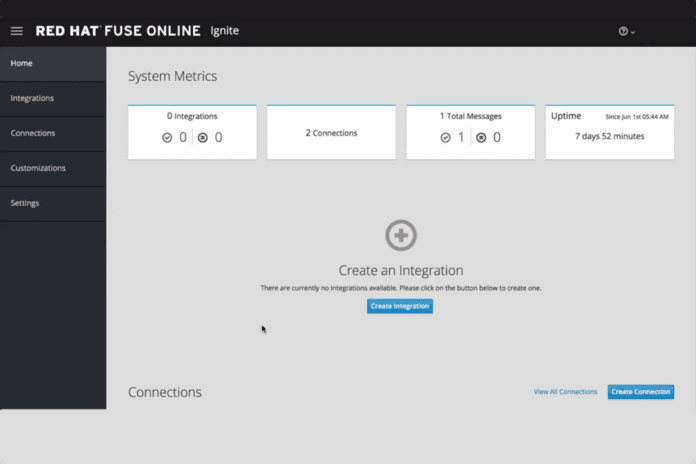 The products that are part of Red Hat Integration include Red Hat Fuse, Red Hat AMQ and Red Hat 3scale API Management. Parulkar said that Red Hat is aiming for a quarterly release cadence for Red Hat Integration, so the bundles will include all of the new features and updates that are released in the individual products within that time period.

Red Hat AMQ is based on the open-source Apache ActiveMQ message broker technology. While there has been on-premises versions of AMQ available in the past, Red Hat is now launching an AMQ online service as well. Parulkar explained that AMQ Online is not separate from Red Hat AMQ, but rather provides customers with a different way to manage their application messaging needs. AMQ Online is available on OpenShift Container Platform and provides a self-service, browser-based experience. It is based on the EnMasse upstream project.

“With AMQ Streams, we have specifically added capabilities to run Apache Kafka services on Kubernetes, via the open-source Strimzi project,” Parulkar said. “Though it can run on other Kubernetes platforms, or even in non-containerized environments, we have optimized it for running on OpenShift Container Platform and harnessing the additional benefits of an OpenShift-native experience.”

“Integration and messaging often go hand-in-hand, where an integration service or API developed in Red Hat Fuse can take advantage of real-time messaging via Red Hat AMQ,” he said. “Red Hat AMQ can be used stand alone if the customer is only looking for core messaging capabilities.”

Parulkar commented that integration has historically been addressed late in the development cycle but that Red Hat has advocated for integration to come earlier in the development cycle, and built Red Hat Fuse with the core application developer in mind. Starting with Red Hat Fuse 7, which was launched in June 2018, Red Hat has introduced new capabilities into the platform that are tailored for a wider group of users.

“The dev tools and capabilities are still there for the core application developers,” Parulkar said. “But we also now provide tools that are suited for integration professionals, as well as the so-called citizen integrator who will be much more comfortable accessing integration capabilities from a browser, and be able to create integrations via a low-code, drag-and-drop interface.”