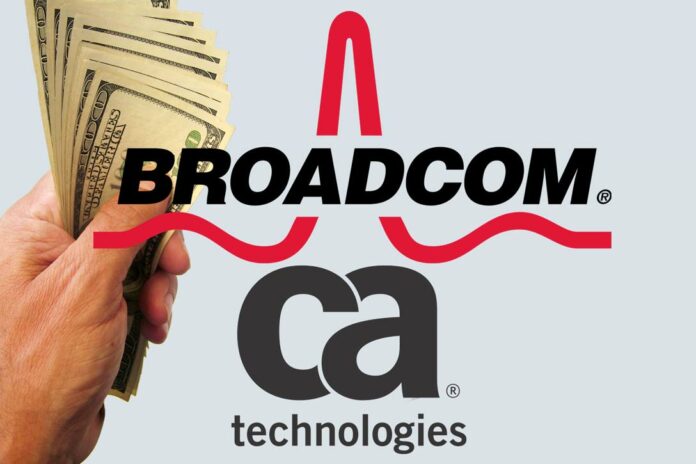 Broadcom, which make a failed bit to buy rival chip maker Qualcomm for $117 billion after acquiring networking gear vendor Brocade for $5.5 billion, is now turning its attention to software maker CA Technologies in a bid that indicates a shift in priorities for the chip maker.

The proposed $19 billion deal moves the company’s focus away from data center infrastructure and components to IT software and solutions that reach not only into the enterprise, but also into mainframe environments.

In documents filed with the Security and Exchange Commission (SEC) July 11, a lot of the focus was on CA’s ability to grow Broadcom’s recurring revenues, expand its margins and earnings and rapidly broaden the size of Broadcom’s addressable market.

Officials for acquisition-happy Broadcom this week announced plans to buy CA, a move President and CEO Hock Tan in a statement called an important step in building “the world’s leading infrastructure technology companies. With its sizeable installed base of customers CA is uniquely positioned across the growing and fragmented infrastructure software market, and its mainframe and enterprise software franchises will add to our portfolio of mission critical technology businesses.”

The deal is expected to close in the 2018 fourth quarter.

In a presentation to investors and given to the SEC, Broadcom officials outlined the assets CA will bring to the chip maker, including $2.2 billion in annual revenue related to mainframe systems that compete with those from IBM and $1.7 billion from enterprise IT offerings. Those systems handle everything from databases, application development, automation, DevOps, application and data security as well as product and portfolio management.

Furthermore, Broadcom’s addressable market will jump from about $65 billion now—which includes semiconductor, wired infrastructure, enterprise storage and wireless communications that are dealt with through products from prior acquisitions such as Emulex, Brocade and LSI—to $200 billion. Revenues of a combined company could reach almost $24 billion, up from Broadcom’s $19.7 billion.

Despite those numbers and Tan’s optimism about what CA will bring to Broadcom, the announcement shook the industry and hit the chip maker with significant blowback. Broadcom’s stock price took a 14 percent hit and also cost the company a member of the board of directors who reportedly has played a significant role in Tan’s aggressive acquisition strategy.

The same day that the deal was announced, Ken Hao, a managing partner and managing director for venture capital firm Silver Lake, resigned as a director to “avoid any potential conflict of interest” in his role on the board and with other companies in Silver Lake’s portfolio.

In an SEC filing, Broadcom officials said that Hao’s “resignation was not the result of any disagreement between Mr. Hao and Broadcom.”

Some financial analysts were positive about the possibility of Broadcom buying CA, noting that it makes sense in a modern data center environment where management, security and automation software is growing in importance. Through that lens, the idea of Broadcom becoming a larger data center infrastructure player by acquiring a major software vendor seems logical.

However, not everyone sees the rationale behind the deal. Rob Enderle, principal analyst with The Enderle Group, said he sees the proposed CA deal—as well as the massive hostile bid for Qualcomm—more as a way of distracting investors from Broadcom’s larger financial picture.

“There is no strategic value for Broadcom to acquire CA other than it will be an incredibly difficult merger and it will screw up the financials for months,” Enderle told eWEEK in an email.

“They can bury tons of write downs during the process. This would be like Intel trying to buy Oracle—you’d wonder if executive management had a substance abuse problem, Enderle stated in his email.

“But I think it is likely this is being used to conceal what could be an ugly financial reality underneath all these mergers. This one stinks to high heaven. It’s like large-scale gambling—you keep things in motion so you can’t see what is underneath,” Enderle said.

Patrick Moorhead, principal analyst with Moor Insights and Strategy, told eWEEK that this appears to be more of a financial play for Broadcom than a technology one. While Qualcomm fit well in Broadcom’s technology portfolio and similar customer base, CA is on the opposite end of the spectrum from Broadcom’s strengths in mobile devices and the internet of things (IoT).

“Most of the software that CA does is around mainframes,” Moorhead said. “So if you’re going to go down the more modern route—let’s call it ‘private cloud’ or something like that—I wouldn’t have expected them to buy CA.”

It seems that Broadcom may be taking a turn into becoming something of a portfolio firm such as Warren Buffet’s Berkshire Hathaway, buying companies that don’t have much in relation with what Broadcom does, fix the companies and then keep them or sell them, the analyst said.

Broadcom has grown rapidly in recent years through acquisitions. Avago Technologies had bought Emulex and LSI before buying Broadcom in 2015 for $37 billion and assuming the Broadcom name. In 2017, it completed the deal for Brocade and then turned its attention to Qualcomm, whose officials aggressively resisted the takeover proposal. Eventually Broadcom’s bid ended when the Trump administration in March issued a presidential order banning the deal over national security concerns.

As the Qualcomm takeover initiative ran its course, Broadcom was in the process of moving its headquarters from Singapore to San Jose, Calif., a move that generated speculation the company was hoping to ease regulatory concerns about the Qualcomm acquisition.