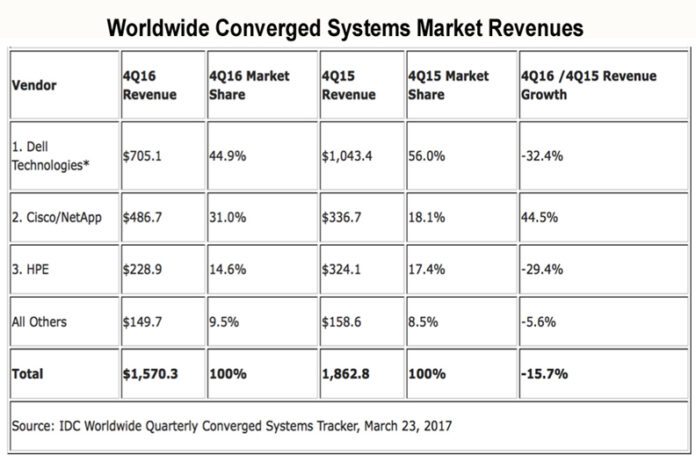 IT’s converged systems market is doing anything but converging: It expanded at a modest pace around the globe overall in 2016, although it suffered a hiccup in Q4 2016.

Research from IDC released March 24 indicates that the full year 2016 worldwide converged systems market revenues increased 5.8 percent to $11.3 billion, compared to calendar year 2015. However, the market did hit a snag in Q4, falling back by 1.4 percent year over year to $3.1 billion during the fourth quarter.

No specific reason was given for the Q4 setback, but it’s possible that companies simply weren’t interested in buying converged data center systems to give as Christmas presents.

According to IDC, Dell EMC continues to lead the traditional Worldwide Integrated Infrastructure and Certified Reference Systems market with a 44.9 percent share. Cisco Systems is in second place with a 31 percent share, and HPE is third at 14.6 percent.

Cisco grew the most in converged systems with a 44.5 percent year-over-year sales increase.

For the full year 2016, the hyperconverged system market surpassed $2.2 billion in global revenue, up 110 percent compared to 2015.

As IDC data reported, Dell EMC was the fastest-growing hyperconverged system market vendor, growing revenue at a whopping 206 percent in 4Q 2016 year over year, based on the sales of VxRail Appliances, VxRack Systems and the XC Series.

Taking a look at IDC tables for 4Q 2016, Dell EMC held a 17 percent market share of the hyperconverged system market, behind only Nutanix (20 percent), who together were distantly followed by H3C (3 percent), HPE (2 percent) and SimpliVity (2 percent) among named vendors.

“The converged systems market is going through a period of change,” said Eric Sheppard, research director, enterprise storage and converged systems. “We are seeing strong growth from products with new architectures, increased levels of automation, and heavy use of software-defined technologies.

“This growth has been offset by reduced spending on traditional converged systems and a conscious decision by some vendors to terminate some parts of their product portfolio.”