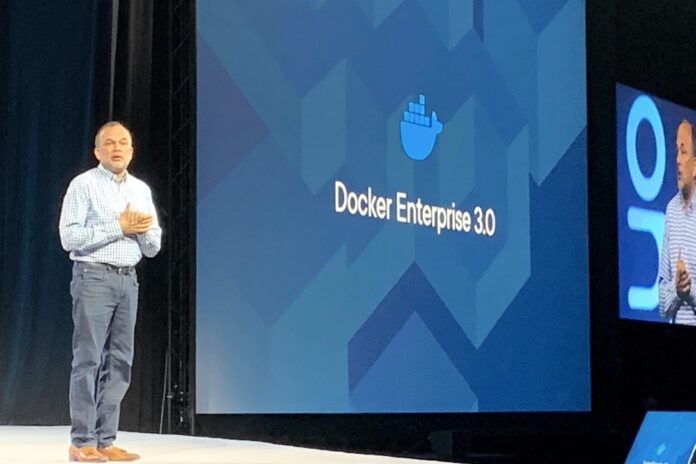 SAN FRANCISCO – Docker CEO Steve Singh kicked off his company’s DockerCon 19 event with the assertion that container technology is the engine for innovation in the modern digital economy.

DockerCon runs from April 29 – May 2 with approximately 5,000 attendees gathered to learn and discuss the container technology that Docker created. DockerCon also served as the venue for the company’s new Docker Enterprise 3.0 release announcement, bringing together new desktop, application, Kubernetes and cloud innovation to market, in an effort to help fuel the next stage of the digital economy.

‘In a world of cognitive computing, containers are that basic unit or the standard upon which all transformation will occur,” Singh said. “In fact, by next year, more than 50% of global organizations are going to be running containers in production.”

“Container platforms are now the mainstream for how you build applications how you share them, and frankly how you manage them,” Singh added.

“What we often find in enterprises is a small cadre of Docker experts, but then there are also hundreds, if not thousands, of developers who want to use Docker, who are not yet experts,” Scott Johnston, EVP & GM, Enterprise, Docker, told eWEEK.  “So Docker desktop enterprise, is the way that we’re going to onboard them and make them productive with Docker quickly, without them having to become experts first.”

Another effort first announced at Dockercon EU that is now coming to productized fruition is the Cloud Native Application Bundle (CNAB) as a joint effort with Microsoft. Now at DockerCon 2019, CNAB is making its way into Docker Enterprise 3.0 as a product offering known as Docker Applications.

“Docker Applications is a way to package a container of containers, including packages and the application descriptors,” he explained.

The goal with CNAB and Docker Applications is to simplify how developers and operations can build, share and run multi-container applications. Johnson said that CNAB as a specification is still being enhanced by Docker, Microsoft and their partners, with a direction to turn CNAB over to some form of open governance body in the future.

For existing Docker users, Johnson said that embracing Docker Applications will be an easy step, since it uses existing constructs that developers have already been using, including the Docker Compose tool.

“If the customer is using Docker Compose today, the Docker apps tooling just automatically ingest that into the Docker app format,” Johnson explained. “So that’s the beauty of the Docker app is it lets you consume any sort of app descriptor format and make it productive in the DevOps pipeline.”

The Docker Enterprise 3.0 update also integrates an enhanced Kubernetes container orchestration integration that is now being dubbed as the Docker Kubernetes Service (DKS).

With DKS, Johnson said the goal is to align the version of Kubernetes that a developer is using on the desktop for developer with the target Kubernetes cloud deployment, to reduce any potential version conflict friction.

While Docker is advancing its Kubernetes effort, it is still working on its own Docker Swarm container orchestration system which has been enhanced in the 3.0 update. Johnson said that among the new Swarm capabilities is improved Microsoft Windows authentication and automation capabilities.

Docker Enterprise as a Service

To date, Docker has offered its commercial products on a subscription model, with organizations running the platform on their own. There has also been a consumption service model, with Docker Enterprise available on Amazon Web Services (AWS). At DockerCon, Docker is expanding with the announcement of Docker Enterprise as a Service, which provides a managed service for Docker Enteprise. The service manages deployment and operations for users.