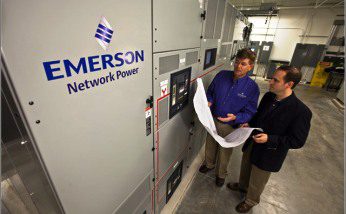 Emerson Network Power, which is moving into new sectors to augment its bread-and-butter UPS business, on Jan. 16 commissioned a new dedicated group to serve the IT needs of enterprises with massive data centers.

It is believed that this may be the first specialized division of its kind in the business.

Emerson made the announcement at the fourth Open Compute Summit, being held at the Santa Clara Convention Center through Jan. 17.

Branching Out to New Sectors

Emerson, which made IT hardware for more than a generation, has been branching out during the last five years or so by adding a software division, Avocent, and acquiring a number of smaller companies.

The Hyperscale team will use anything it needs within the vast Emerson catalog to help design and construct cloud systems, including the company’s new Trellis data center management platform, a hardware and software package that one simply plugs in, connects to all the necessary nodes and puts to work.

“We focused on a segment of the market, actually, a hole in the marketplace, that we were underserving,” Dave Gerhart, vice president of marketing for the Hyperscale group, told eWEEK. “The set of customers are what we call hyperscale customers, who are building large-scale data centers. The way they were going about building data centers wasn’t suited to our traditional (IT) dialogues — whether it be technology, channel engagement, relationships, understanding what the solutions really should be, and so on.

“What we’re seeing right now is a change that we really hadn’t seen before. Previously, the industry had been served from the inside out: UPS, cooling, racks, PDUs — and that end of the industry had always been served by local electrical contractors and consulting engineers. Smaller-size data centers probably will always be served that way. But larger facilities need different attention.”

As companies shift to megawatt-size data centers, Gerhart said, there’s a different incentive for operators to solve the issues of capital and operational costs.

“We recognized that they are employing their own teams of people to take the place of the consulting engineers, and that drives a different relationship with their infrastructure suppliers,” Gerhart said. “They want to have a greater role in specifying the equipment down to the architectural level. They’re willing to try newer technologies to accomplish a business goal. Tying that business goal to a vendor offering was a hole in our portfolio and practices that we needed to close.”

For example, Web services providers such as Facebook, Google, Amazon and eBay are rapidly building massive data centers in various sections of the United States and Europe. One facility Facebook owns in Prineville, Oregon,takes up more than 330,000 square feet of space and is 10 times the size of the average Walmart store. Now that’s massive.

The huge IO Phoenix data center in Arizona is another example: 215,000 square feet of data center space, full-service, modular, and Tier III design certification. More of this type of data center will be built in 2013 than in any year past.