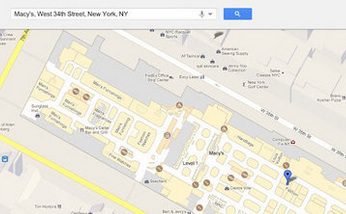 In the wake of Apple’s iOS 6 mapping application debacle, Google’s trusty maps application, Google Maps, now seems more indispensable than ever, and on Nov. 21 the search engine giant expanded a feature that allows users to take a peek at the interior layouts of certain buildings—just in time for Black Friday mall madness.

Although the feature has been available for users of the company’s Android-based smartphones, Google has now extended the features to PC Web browsers, allowing users to see the interiors of more than 10,000 locations around the world, including retail stores.

However, iPhone users and other non-Android based devices that offer Web browsers are also in luck, as the addition of the Web interface means other smartphones and tablets can use the feature.

“Before heading home for the holidays or out to shop on Black Friday, check out indoor maps of the airport or shopping mall on your desktop to better plan your trip,” a blog post on Google+ explained. “Simply zoom in on a building on Google Maps and you’ll automatically see a detailed floor plan with helpful labels for gates at the airport, stores within the mall, departments within a retail shop, as well as ATMs, restrooms and more.”

The indoor maps are currently available for select venues — including transit stations– in certain countries. A list of some participating locations across the globe can be found on Google’s support page.

In the United States, Google offers indoor maps for more than 20 major airports, including Chicago’s O’Hare and Atlanta Hartsfield-Jackson, more than 50 shopping centers, including the Mall of America (phew) and a smattering of hotels, hospitals, convention centers and casinos across the country.

In an effort to expand its listings, Google is reaching out to venue owners interested in adding their floor plan to Google Maps by asking them to visit the Google Maps Floor Plan tool to help customers get acquainted with their location.

It’s been an interesting couple of months for mapping applications, which are one of the most critical components of any successful smartphone platform.

Earlier this month Nokia introduced Here, a cloud-based solution that will extend Nokia’s considerable mapping expertise to multiple screens and operating systems. In the coming weeks, Here will be available as a free mapping and location service for iOS users, and in early 2013, Nokia plans to release a Here software development kit (SDK) for Android device makers.

Nokia also announced Nov. 13 that it is partnering with Mozilla to build a mobile Web version of Here Maps for the latest version of the company’s Firefox browser, planned for 2013, and is purchasing Earthmine, a Berkeley, Calif.-based company that makes “reality capture and processing technologies” that will become integral parts of Here’s 3D map-making capabilities.