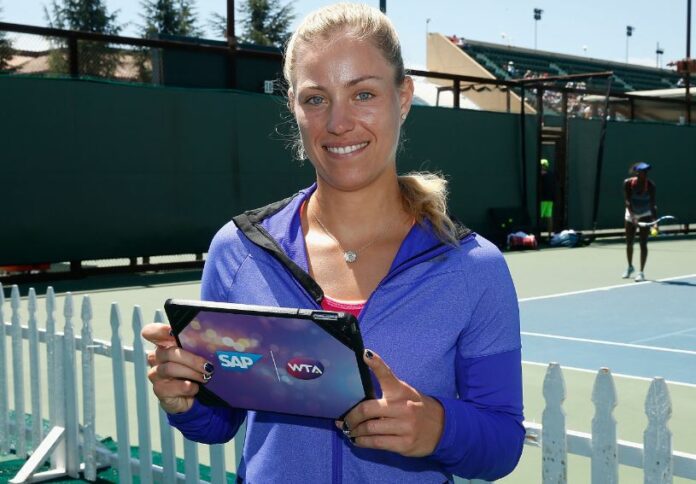 STANFORD, Calif.—Sports news channels informed us that in women’s professional tennis at the Bank of the West Classic Aug. 9 in Silicon Valley, No. 14-ranked Angelique Kerber of Germany (pictured) won the tournament in three hard-earned sets over Karolina Pliskova of Czechoslovakia, 6-3, 5-7, 6-4.

But what they aren’t necessarily explaining is that Kerber, now ranked No. 11 following her victory, had some extra help from big data analytics in cloud. As a result of both her talent and new-gen IT, Kerber is now tied with Wimbledon champion Serena Williams for the most wins this year (four) and is heading to a world Top 10 ranking.

The Women’s Tennis Association and SAP are embarking on a project this year that enables coaches and players to use a new cloud service in real time—and, for the first time, during breaks in a match—that charts every action on the court to provide raw data for them to use.

Every Hit, Miss Recorded in Data

For example, the sensor-driven service records every hit, every mishit, every spot where the hit bounced on the court, how fast the ball traveled, how the wind velocity and court temperature affects play and dozens of other factors. All this real-time information can help a coach and player learn more about the nature of the match and determine tendencies of the player—and her opponent—in order to gain an advantage.

The WTA and SAP have been working on this project for more than a year, WTA CEO Stacey Allaster told a group of journalists at the Stanford event. SAP announced it last October at an event in Singapore, and the Stanford tournament was one of the first in which coaches and players put it to work.

The setup is, on the face of it, simple; but it’s certainly not simple to execute. Every square inch of the court is monitored, with the data sent to a HANA in-memory database in SAP’s cloud. There, it is stored until queries in the specialized software call it up.

For example, if a coach thinks he sees a weakness in an opponent, say, that she’s vulnerable to a serve hit to her backhand, he can enter a query to see how many times she mishit a serve to her backhand. This can be done during the match, in real time, and executed on a tablet. Then, during a time out, the coach can confirm the observation and relate the tendency information to the player, who can then focus on attacking the vulnerability.

“This really helps me trust my coach a lot more,” Kerber told a group of journalists at the Stanford event. “I trust him already, of course, but now I get to see proof of what he’s seeing!”

All the information, including video of every match, is being saved in the SAP cloud for reference by all qualified WTA players, coaches and officials. It’ll become a massive library of tennis.

Currently, WTA players and coaches receive post-match point-by-point analysis from SAP that allows them to visualize the subtle technique variations that players use throughout a match, helping them to analyze performance. During the 2014 WTA season, SAP experts worked closely with coaches and players to identify what information was essential to create a powerful analytics solution to optimize performance.

As a result of this co-innovation approach, SAP developed the final app to enable players and coaches to access key performance data, such as the data points noted above.

The tennis world, long a stronghold of tradition and old-world sensibilities, hadn’t even allowed coaches to consult with their players during matches until only recently. So using the new on-court app represents a big step forward.

“How fair is that, when you think about it?” Allaster said. “All the other sports get to call timeouts and allow coaches to strategize with players. So why not tennis?”

“We really needed to update and modernize our sport, and technology can play a major role in this by bringing more information to our fans without altering the integrity of the game. Tennis is a data-driven sport, just like all the others, and information is power. Many of our matches usually come down to just a few key points, and any advantage that players and coaches can gain by analyzing trends and data could deliver an edge in the match,” Allaster said.

SAP sees this use case as simply another one that works well in the real-time world of the speedy HANA database, which SAP brought into the market in 2010.

“Our goal is simply to work with the coaches and players to find out just how they can be better informed,” SAP CTO Quentin Clark said. “We are using our technology to augment their capabilities, so they can get better at their work.”

In addition to the coaching tool, SAP developed the official WTA Finals mobile app to provide fans around the world with access to exclusive content, news, virtual replays, fan polls, statistics, player profiles and photos, along with ticketing and tournament information.

SAP already has sports-related customers in the San Francisco 49ers, which use the HANA database and a special app for researching player recruiting, along with the German national football (soccer) team, among others. So moving into tennis seems a natural progression in terms of use cases.