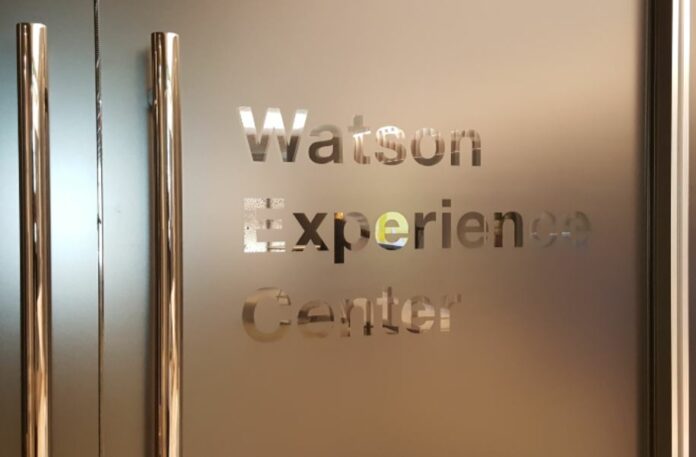 Members of the media attended the first demo session at the new Watson Experience Center on Dec. 12.

This is the place where current and potential IBM customers can come and see new functionality that’s constantly being incorporated in the well-known analytics platform, talk with Big Blue product managers, architects and engineers about how it can potentially help their enterprises and find out about additional support as it becomes available.

Whereas the usual-suspect first movers–the large enterprises–were generally the first users of Watson, IBM is now making a concerted effort to spread the intelligence wealth up and down the food chain, so that small and medium-size businesses also can take advantage of the wealth of information Watson offers.

IBM, however, isn’t intending to conquer all fields of knowledge off the bat; while one can ask the computer system anything at any time, the company itself is focusing the emphasis first on logically important use cases. Health care and TED Talks, of all things, are two of the first ones being demonstrated at the Watson Experience Center.

By health care is meant serving as an all-knowing resource for physicians and other health-care practitioners right there on the front lines; being available via tablet or laptop when the doctor and patient are conferring or when consulting with other professionals is required. Watson can connect dots to make fast and accurate decisions on diagnoses, medication selection and other questions in real time, something that simply wasn’t available previously.

In a subsequent article, eWEEK will take a closer look at how Watson works hand-in-hand with physicians in delivering new-gen health care information in real time.

In the TED Talks use case, Watson can be utilized for finding topics, concepts, transcript and photographs from the international knowledge talk series, and information can be found in literally seconds via natural-language queries.

All one needs is a cloud subscription to one or more Watson services, and off you go. Go here for more information.

What Watson Is Doing in Security Sector

While the San Francisco demonstration headquarters is focusing on two important sectors, Watson is also busy working on numerous other problems: IT security, for one. Caleb Barlow, vice-president of IBM Security, said last week that 40 companies soon will begin beta testing of Watson’s cognitive abilities in solving security issues that have scourged IT since the internet went mainstream 20 years ago.

“The learning process is going well. Part of this is getting it out there to several beta customers including the University of New Brunswick, Cal Poly University, Sun Life Financial, University of Rochester Medical Centres and others,” Barlow told an interviewer.

Barlow said by teaching Watson to track reports, blogs and other information on emerging threats, they will be able to assist companies facing cyber attacks.

Barlow said cognitive technology will help security teams find and detect cyber threats, but it won’t replace humans. Watson won’t take action against any cyber threat. Instead it will offer advice on what to do.

Barlow said it’s unclear how much beta testing Watson will need before it’s ready to take on the job of combating cyber threats. He said it all depends on how fast Watson learns.

How Watson Helps Retailers During the Holiday Season

This holiday season, retailers are increasingly turning to Watson to better understand, connect with, and create superior experiences for in-store shoppers. IBM this week announced the pilots of Watson-enabled mobile concierges at both Mall of America, the largest commercial shopping center in the U.S., located in Bloomington, Minn., and Fashion Island, a high-end shopping mall in Newport Beach, Calif.

Mall of America’s “E.L.F.” and Fashion Island’s “At Your Service” both tap into Watson, via Satisfi, to enable customers to manage a variety of holiday shopping needs in natural language from their mobile devices. Satisfi is a location-based intelligent engagement platform that combines the speed and accuracy of automation and the personality of a live person. For example:

–“E.L.F.,” a holiday-themed chatbot, uses Watson to help guests plan more personalized shopping experiences, understanding and interpreting guest inquiries and sentiments as they interact either through Facebook or the mobile browser on their phone. E.L.F. may ask guests how much time they have to spend at Mall of America or what types of things they like to do in order to deliver customized shopping suggestions.

–“At Your Service,” an SMS-based mobile concierge, uses Watson to help guests shop and navigate the shopping center itself, offering seamless access to fast information and creating an enhanced directory right at your fingertips. Guests can simply text (949) 734-7364 and ask questions, ranging from “Where is Neiman Marcus located?” to “Where can I valet?” and receive tailored responses to find stores, facilities, deals, etc.

Both solutions leverage the speed and simplicity of the Watson Conversation API to engage consumers in a natural language. They also follow on the success of Satisfi and IBM Watson’s first pilot with Macy’s from this past summer called “Macy’s On Call” and highlight how consumers are increasingly turning to their mobile devices to help navigate in-store shopping.

We’ve only begun to investigate the possibilities of a huge, connected, cognitive brain like Watson’s –one that can fill in the blanks to virtually anything we need, in any sector, on any topic, we can imagine. And if you want to go visit this brain and ask it a few questions in person, you can now do it at 505 Howard Street, San Francisco, Calif.

Just remember to make an appointment.