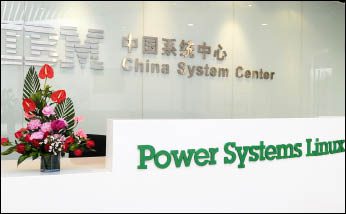 IBM announced the opening of its first Power Systems Linux Center, located in China, and also announced new partnerships with Red Hat and SUSE to meet Chinese demand for Linux.

The moves are part of IBM’s further expansion into China, a nation where the company already has a substantial presence. With the opening of the first Linux innovation center for Power Systems clients and business partners, known as the Power Systems Linux Center, located inside IBM’s China Systems Center in Beijing, IBM will make it simpler for software developers to build and deploy new applications for big data, cloud, mobile and social business computing on open technology building blocks using Linux and the latest IBM POWER 7+ processor technology.

IBM introduced the new Linux center at a press conference in Beijing on May 14.

In its collaboration with Red Hat and SUSE, IBM is providing Chinese enterprises with technology to meet increasing demand from businesses in China for optimized and pre-integrated computing systems running enterprise applications on Linux. The companies will use the new center to help drive more Linux-based solutions in the marketplace and accelerate Linux adoption on Power Systems.

Company officials said the new center comes at a time when businesses in China are aggressively taking advantage of big data, cloud, mobile and social computing projects to capture continued growth in industries such as financial markets, banking, communications, retail and transportation. More Chinese clients are choosing IBM’s Power Systems for these workloads instead of commodity x86 hardware due to the POWER processor’s ability to handle up to twice as many tasks at the same time, compared with x86 architecture and the capacity to run more unique workloads on each server.

“As enterprise adoption of Red Hat Enterprise Linux grows, companies are looking for faster and simpler ways to take advantage of it for new kinds of workloads like big data and cloud computing to achieve the best possible performance for their applications,” Sen Min Chang, general manager for Red Hat Greater China Group, said in a statement. “Red Hat and IBM have collaborated since the early days of the open-source movement to bring new innovations into industries where rapid expansion is creating new opportunities for open-source solutions. The new IBM Power Systems Linux Center will address these opportunities, especially for our joint Power Systems clients and partners, and we look forward to serving this important group of users together.”

In February, IBM introduced three new Linux-based Power Systems, each designed to handle big data and cloud workloads to satisfy the volume, velocity and variety of today’s high-performance analytics as well as the growing demand for flexible cloud-based services delivery models. These systems come pre-integrated from the factory with Red Hat Enterprise Linux or SUSE Linux, and are optimized for IBM’s big data analytics software, including IBM InfoSphere BigInsights and InfoSphere Streams software, along with IBM Platform Symphony and MapReduce for high-performance business analytics.

According to the latest figures from the IDC Worldwide Quarterly Server Tracker (Q4 2012), Linux server demand was positively impacted by high-performance computing (HPC) and cloud infrastructure deployments, as hardware revenue improved 12.7 percent year-over-year in the fourth quarter of 2012 to $3 billion. Linux servers now represent 20.4 percent of all server revenue, up 1.7 points from the fourth quarter of 2011. And in China, Linux growth outpaces the worldwide average where, in a growing server market, Linux server share has grown from 9.2 percent to 33.2 percent over the past 10 years.

According to the Linux Foundation’s 2013 Enterprise End User Report, enterprises are adopting Linux to run cloud computing and mission-critical workloads such as big data and mobile computing faster than ever. The report shows enterprise organizations identify Linux as the dominant platform for cloud computing, with nearly 76 percent using Linux servers for cloud and 74 percent planning to maintain or increase Linux use for future cloud initiatives.

The report also shows a dramatic increase in the use of Linux for mission-critical workloads has grown consistently year-over-year to reach 73 percent in 2013. Reliance on Linux for cloud and big data is a strong contributing factor. Moreover, 80 percent of respondents of the world’s largest enterprises plan to increase their use of Linux servers in the next five years, compared with just 20 percent for Windows, the report said.

“Linux is at the point where the question for enterprises has shifted from ‘if’ to ‘when’ it will be used for key business applications, and ‘what’ is the best hardware platform to run it on,” Andy Jiang, SUSE general manager of Greater China and Korea, said in a statement. “For China, the new IBM Power Systems Linux Center will answer this question by helping to bridge skills gaps and speed up the proliferation of enterprise applications running on Linux, and enable customers and partners to understand the performance benefits of SUSE Linux Enterprise Server on Power Systems.

“SUSE and IBM have worked together since the early days of the Linux revolution to integrate SUSE’s Enterprise Linux and open-source solutions with enterprise hardware like IBM Power Systems, helping to accelerate this shift in growth markets,” Jiang said.

Joining IBM, Red Hat and SUSE at the event were government officials and featured speakers from Teamsun, an IBM partner and independent software vendor, and Silk Road Telecommunications, a Power Systems and Linux client.

China has been a hotbed for Linux, as the Chinese government has pledged to support open-source software as much as possible. Linux is big in China in government, financial services, insurance, telecommunications, education and other industries, according to IDC.

IBM has participated in a broad range of open-source projects since 1999, and today this includes OpenStack, Hadoop and KVM in addition to Linux, Eclipse and Apache. More than 600 IBM programmers and engineers are contributing to open source as part of the community, and this includes several dozen experts in China working on projects such as KVM. In November 2012, IBM opened its first KVM Center of Excellence in Beijing. The center, also located at the IBM China System Center, promotes KVM-based solutions from IBM and its partners. Its goal is to help customers and business partners explore and adopt open-virtualization and open-cloud strategies. The center was established as the first KVM Center worldwide because of the rapid adoption of virtualization and cloud computing in China.

“China is one of the fastest-growing countries to adopt open-source technologies like Linux—and Power Systems is often the best platform for Linux because of its advanced performance, security and virtualization,” Colin Parris, IBM general manager of Power Systems, said in a statement. “The center brings together the Linux expertise of Red Hat and SUSE, along with IBM’s leading technical and business experts for Power Systems to provide clients and partners the essential open-source building blocks for high-performance, enterprise-level, data-intensive workloads.”

In June 2012, IBM announced the opening of two new branch offices in the Chinese cities of Yantai and Yinchuan, bringing its total number of locations in the country to 50. IBM continues to identify new untapped markets in second- and third-tier cities in China, in an effort to distinguish itself and secure competitive advantage over other international players.

“China is a key market for IBM, and we have a major program of geographic expansion in place to ensure that we tap into the country’s best growth opportunities—wherever they are,” said DC Chien, general manager of IBM’s Greater China Group, in a statement. “As the IT market in China’s regional cities matures, we are experiencing greater demand for advanced solutions and services, meaning that a local physical presence is essential for our business.”

According to research firm IDC, the IT services market in China is expected to almost double through 2015—from $12.2 billion in 2010 to $23.7 billion in 2015. IDC’s China Services Market report says the growth will continue to be led by the adoption of next-generation IT systems as well as IT services spend due to the implementation of China’s 12th Five-Year Plan.

Meanwhile, in March, Canonical announced that the China Software and Integrated Chip Promotions Centre (CSIP) was developing a new reference architecture for Chinese operating systems based on Ubuntu; it is known as Ubuntu Kylin. CSIP said the move helps strengthen the Chinese government’s five-year plan to promote open-source software and accelerate the growth of the open-source ecosystem within China.

Additionally, CSIP, Canonical and the National University of Defense Technology (NUDT) have formed the CCN Open Source Innovation Joint Lab in Beijing. The Joint Lab hosts engineers from each organization who will accelerate the development of a China-focused version of Ubuntu for desktop and cloud.

Canonical said Ubuntu Kylin goes beyond language localization and includes features and applications that cater to the Chinese market. In the 13.04 release, Chinese input methods and Chinese calendars are supported, there is a new weather indicator, and users can quickly search across the most popular Chinese music services from the Dash.

Future releases will include integration with Baidu maps and leading shopping service Taobao, payment processing for Chinese banks, and real-time train and flight information. The Ubuntu Kylin team is cooperating with WPS, the most popular office suite in China, and is creating photo editing and system management tools that could be incorporated into other flavors of Ubuntu worldwide.

“The release of Ubuntu Kylin brings the Chinese open-source community into the global Ubuntu community,” sMark Shuttleworth, founder of Ubuntu and Canonical, said in a statement. “With Ubuntu Kylin, China now has its own secure and stable desktop operating system, produced alongside Ubuntu’s global community. Ubuntu combines proven technology with a mature ecosystem and strong OEM and ISV partners, and this initiative allows the Joint Lab to bring those strengths to China across the full range of platforms: desktop, server, cloud, tablet and phone.”