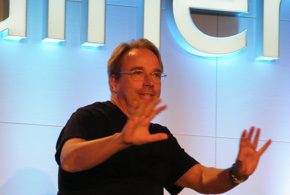 TORONTO—On Aug. 25, 1991, Linus Torvalds sent a mailing list message announcing that he was building a new operating system. Today, nearly 25 years later to the day, Torvalds took the stage at LinuxCon here, recounting that original message and the years since then. For Linux’s creator, the success of the Linux operating system has a whole lot to do with the General Public License (GPL).

Torvalds was interviewed on stage at LinuxCon by his longtime friend Dirk Hohndel, who recently left Intel to become the chief open source officer at VMware.

In his original message, Torvalds noted that his operating system wouldn’t be portable and would only work with a very specific hard drive. Today, Linux is very portable, running on mobile devices and supercomputers and everything in between.

“It was supposed to be a personal project,” Torvalds said of his original expectations for Linux. “I expected others to be interested from a theoretical standpoint.”

Torvalds admitted that the first few releases of Linux were somewhat unpolished, with a core part of the Linux kernel 25 years ago being system drivers.

“Drivers are still most of what that kernel does,” Torvalds said. “The early Linux drivers were slightly less complete than what we have today, and that’s why the early Linux code was only 10,000 lines and now we’re at 17 million lines of code.”

In his original announcement for Linux 25 years ago, Torvalds wrote that his effort was not going to be big and professional. It took awhile for it to turn professional, and even today the process defies traditional hierarchies, he said. Linux kernel development today doesn’t even have a traditional organization chart. “From the outside, it all looks very organized with lots of code and new releases every 10 weeks,” he said.

For insiders, those who have been around Linux kernel development for years, Torvalds said developers just know whom to contact in terms of specific maintainers for code within Linux. He emphasized that there aren’t clear maintainer roles for Linux code in an organization chart fashion—and that’s a good thing, he claims, as it eliminates many of the traditional politics associated with organizations.

“It’s not a hierarchy; it’s more of a network of people,” Torvalds said.

In terms of Linux highlights over the last 25 years, for the most part, Torvalds said that everything has been really good. His earliest highlight was actually just realizing that Linux works.

More recently, though, Torvalds’ main highlight is the Linux development process. He noted that he doesn’t write much code anymore; rather, he helps manage the process of how Linux is built.

“I don’t have much code in new kernels that I can be proud of, but I’m proud when the release process works and we get things done,” Torvalds said.

In terms of lowlights over the last 25 years, Torvalds said the worst moments were likely 15 years ago when the Linux development process didn’t work as well as it does today. In particular, there were many process issues during the Linux 2.4 development cycle. Today he’s mostly happy with the process, though he admits Linux kernel developers don’t always get along.

“We still have arguments, we’re not all happy people, and we don’t all love each other,” Torvalds said. “But I get the feeling that there is lots of respect on the technical side.”

Torvalds also talked at LinuxCon about the risk of fragmentation of Linux, which is something that happened to Unix two decades ago. With Unix, multiple vendors made very different choices and took that operating system in disparate paths. For Torvalds, the choice of the GPL created by the Free Software Foundation (FSF) was and still remains the answer to prevent fragmentation.

“I love the GPL and see it as a defining factor in the success of Linux,” Torvalds said.

GPL is what is known as a reciprocal license and requires any code adjustments to be contributed back to the community and made freely available. Torvalds said that the GPL enforces the need to give back, which makes fragmentation less likely.

Torvalds also commented about new operating systems, including Google’s Fuscia, which is now being built to enable internet of things (IoT) devices. Fuscia is not being made available under the GPL, and as such Torvalds doesn’t think it will grow a community like Linux’s.

“The GPL says a company may be big, but no one will take advantage of your code. It will always be free, and that can’t be taken away from you,” Torvalds said.