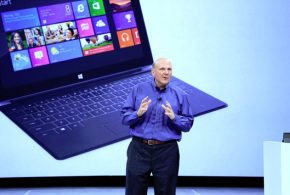 Microsoft announced on Oct. 24 that the company had generated revenue of $18.53 billion in the first quarter of its fiscal year 2014, a record for Microsoft. The Redmond, Wash.-based software maker reported net income of $5.24 billion and earnings per share of $0.62, handily beating analyst estimates.

Wall Street analysts expected Microsoft, which took a massive $900 million write-off due to the poorly performing Surface tablet in its third quarter, to ring up $17.79 billion in sales and hit an earnings-per-share target of $0.54. Noting that the company is in the midst of a major restructuring effort, Microsoft Chief Financial Officer Amy Hood credited the robust financials to brisk demand for business and strengthening consumer demand.

“Our enterprise renewals were very healthy, and our devices and consumer business continued to improve,” stated Hood in company remarks. To keep the momentum going, Microsoft is focused on “technological innovation, supply chain management and global cloud operations” by making strategic investments in those areas, she added. In an Oct. 24 conference call, Hood boasted that her company was “taking share in areas like virtualization and data platform [SQL and related tech].”

CEO Steve Ballmer, whose time at the helm is growing shorter due to his impending retirement, also struck an optimistic note. “Our new commercial services will help us continue to outgrow the enterprise market, and we are seeing lots of consumer excitement for Xbox One, Surface 2 and Surface Pro 2, and the full spectrum of Windows 8.1 and Windows Phone devices,” he said in a statement.

According to Microsoft, commercial revenue hit $11.2 billion in the fourth quarter, a 10 percent gain over the same year-ago period. Strong performers include SQL Server Premium and the company’s commercial cloud offerings, which achieved 30 percent and 103 percent revenue growth, respectively.

Microsoft Chief Operating Officer Kevin Turner reported “robust demand” for his company’s enterprise and cloud services portfolio. “Strong customer adoption of Office 365, Azure, and Dynamics CRM Online is accelerating our business transition to the cloud,” he added in a statement.

Corporate IT departments are on board with Microsoft’s direction, suggested Turner. “Our investments in SQL database platform, Hyper-V, System Center, and Lync are driving market share gains as these comprehensive solutions enable customers to increase their insight and efficiency,” he said.

The company’s devices and consumer category witnessed an increase to $7.46 billion in revenue, up 4 percent year-over-year. Mirroring the continued decline of PC shipments, Windows OEM sales dipped 7 percent. One bright spot: “Windows Pro revenue grew for the second consecutive quarter,” asserted Microsoft. Hood observed during the call that while the business PC market had stabilized, the “consumer segment is more volatile.”

Surface’s fortunes appear to be improving. Sales of the tablet reached $400 million, with more units sold than during the previous quarter, although Hood said during the call that buyers “delayed purchase in anticipation of Surface Pro 2.”

Similarly, Microsoft’s investments in Bing seem to be having an effect. Search advertising revenue improved by 47 percent, said the company, and its share of U.S. searches climbed to 18 percent.