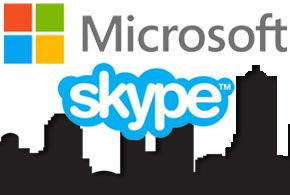 Maybe Microsoft really does love Linux. Although the Redmond, Wash. software giant’s efforts surrounding Linux are largely focused on cloud customers and software developers, folks that use Skype on the open-source operating system are still on the company’s mind.

Microsoft has wholeheartedly embraced Linux as it works to attract more enterprise workloads to its cloud, going as far as joining the Linux Foundation as a platinum member in 2016. During the company’s Ignite conference the week of Sept. 25-29, it released its SQL Server 2017 database software with Linux support. Meanwhile, the company is getting developers used to the idea of running Linux containers on Windows server.

But on the desktop, pickings are slim. Microsoft Office, for example, doesn’t work on Linux without jumping through some hoops. However, with Skype, Microsoft is at least attempting to narrow the features gap between the Windows, Mac and Linux versions of the communications software.

The latest Skype Preview for Linux does a better job of mimicking the look, feel and functionality of its Windows and Mac counterparts. It includes a new screen-sharing feature, allowing users to collaborate on projects that benefit from following along with a speaker’s presentation during a group call. On the messaging front, the software allows users to branch out beyond one-on-one chats.

“The new group chat feature for Skype for Linux allows you to talk with several friends at the same time,” announced Microsoft in a Sept. 29 blog post. “We even included options to personalize chats with emoticons, Mojis, and photos so you can express yourself with your own style. It’s a great way to turn your everyday conversations into experiences.”

Microsoft is encouraging users clinging to previous versions of the application to install the Skype Preview for Linux. The previous Skype or Linux clients, up to and including version 4.3, were retired on July 1, reminded the company.

Although Skype’s future on Linux seems secure, the brand is retreating a bit from the enterprise unified communications software scene.

Microsoft announced that Teams is set to replace the Skype for Business client application on Sept. 25. Released in March and competing with the rival Slack messaging platform, Microsoft Teams is a chat-based group collaboration application included with select Office 365 plans.

Teams will soon inherit many of Skype’s virtual meetings and calling capabilities, said Lori Wright, general manager of product marketing at Microsoft Teams and Skype, in her announcement related to the change. However, companies that have already invested in the Skype for Business ecosystem won’t be left out in the cold, assured the Microsoft executive.

The move has gained Microsoft at least one prominent supporter. Polycom, famous for the three-legged phones centered on tables in countless corporate conference rooms, announced new systems that support Teams at the Ignite conference.