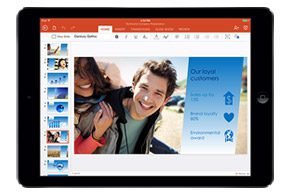 Microsoft on March 27 launched a native Office app for Apple’s best-selling tablet, the iPad, in 135 markets and 29 languages. The app for iOS 7 and up is available now at the Apple App Store at no additional cost for Office 365 subscribers (non-subscribers can only use the app to view, but not edit files).

The software giant has weathered criticisms over the years for not capitalizing on the popularity of the iPad by releasing native Office apps for the device. Last year, Morgan Stanley analyst Adam Holt estimated that Microsoft was letting $2.5 billion in yearly sales slip away by neglecting Apple’s tablet.

In his first major press event as Microsoft CEO, Satya Nadella took to the stage in San Francisco to expand on his company’s “innovation agenda.” It includes delivering products and services, like Office for iPad, that fit into the software giant’s new world view of “ubiquitous computing and ambient intelligence.”

Microsoft is gearing up for a near future where computing spans multiple devices, including a “variety of form factors that will come to be over the coming years,” making computing ubiquitous. Meanwhile, Nadella predicts that practically every interaction will be digitized, leading “to perhaps the most important trend of all—which we are at the very beginning phases—which is to reason over all that digitized information,” he added.

“It’s an amazing canvas for innovation and an amazing opportunity for growth in our company,” said Nadella. Part of achieving that growth is to offer “one cloud for everyone and every device.” Fitting into that strategy is Office for iPad, which he described as part of the “first step on a journey of making this a great innovation vector for all of Microsoft.”

Julia White, general manager of Microsoft Office, then offered a demo of the app for Apple’s tablet. Clutching a white iPad, she showed how the new Office for iPad (Word, Excel and PowerPoint) renders complex Word layouts flawlessly compared with the iPad’s native viewer, which botched the file’s table of contents and displayed a jumble of words in some sections.

The touch-optimized app was developed specifically for the iPad, with “all the satisfying features that you expect in Office,” said White. “This is unmistakably Word, but it’s also very natural on the iPad,” she said as she manipulated on-screen elements and sprouted in-context menus as she interacted with the document. The same full-featured, desktop-like functionality is present in the Excel and PowerPoint apps.

White stressed that “this is definitely not the ported Windows app to an iPad, and it’s certainly not the iPhone app running in 2X. These are uniquely built for the iPad. Fantastic Office, great touch experience.”

John Case, corporate vice president of marketing for Microsoft Office, said in a blog post that the Office apps “have the robust capabilities and familiar look and feel that is unmistakably Office, while offering a fantastic touch experience built from the ground up for iPad.” Office documents, he added, “will look as good as they do on your PC and Mac, and better than ever on your iPad.”

In a departure of its PC roots, no keyboard or mouse is required, he reminded. “You can even use iPad features like voice dictation to draft a Word document or AirPlay to project a presentation wirelessly on a TV screen.”