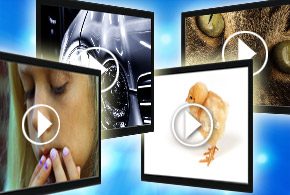 Skype’s new Creators Mode isn’t the only video technology that Microsoft is showing off at the National Association of Broadcasters’ NAB Show in Las Vegas, April 9 -12.

Microsoft is also demonstrating the new features in Stream, which are part of the Dynamics 365 refresh for spring 2018, a sweeping set updates to the business software platform that affects various other Microsoft products.

Formerly Office 365 Video, Microsoft Stream is a cloud-based enterprise video streaming platform that enables businesses to create and securely share video content with their workforces by embedding it into SharePoint sites and Teams conversations, among other possibilities.

Now the service allows customers to affix Spotlight videos to Stream and Stream Group homepages, bringing attention to major announcements, informative videos and other must-see content. Spotlight videos are prominently placed and can be viewed by all employees who have access to the service.

Supplementing Stream’s AI-enabled transcription service are new inline editing capabilities. Users can now click on a transcript and any fix speech-to-text errors that may crop up. Stream can also now detect when a certain person appears in a video and creates a timeline that allows viewers to skip ahead to portions of the video where a selected person appears. Users can curate this experience, merging the timelines of multiple people or hiding people who aren’t central to a video.

Building on Team’s ability to record meetings, Stream will enable users to share those cloud recordings with their colleagues.

To celebrate the one-year anniversary of Teams, Microsoft announced that the chat-based Slack rival would allow users to record their video meetings, complete with an automatic speech-to-text transcripts and participant detection based on the existing functionality found in Stream. The integration not only enables users view recorded meetings into Teams conversations, but also on Stream.

Overall, working with both Teams and Stream should be a little less cumbersome courtesy of new single sign-on capabilities that allow users to seamlessly access Stream videos and channels while working with the Teams desktop client.

Assuaging data privacy concerns, Microsoft announced that Streams is a now a Tier C service under the Office 365 compliance framework that governs many of the software giant’s cloud services. Microsoft is a contractually commited to meeting the data residency requirements of customers in the U.S. and EU, along with other obligations set forth by the Family Educational Rights and Privacy Act (FERPA) and other regulatory frameworks.

Microsoft isn’t the only major cloud provider with a presence at the NAB Show.

Amazon has various new technologies on deck for media and entertainment companies, including content-aware advertising insertion services that use image, object and scene recognition software to help broadcasters and on-demand video providers monetize their video content.