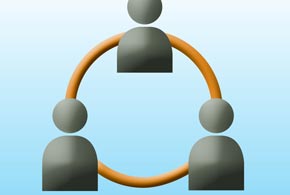 Windows PC users will be soon able to share files and other content with other nearby recipients using Bluetooth in a way similar to how Apple’s AirDrop provides a handy alternative to emailing attachments or launching a cloud storage app to transfer a file.

“Say you’re in a meeting with your bosses and need to quickly send them the report you’re looking at on your screen? Or you and a sibling are hanging out on the couch using your laptops, and you want to send him a screenshot of your latest Minecraft creation? You can now wirelessly share files and URLs to nearby PCs using the new Near Share feature,” blogged Dona Sarkar, head of Windows Insider.

Near Share shows up as an option in the Windows 10 Action Center, which is the pane that sprouts out of the right side of the screen providing quick access to select settings. The Near Share icon also appears in applications like Microsoft Photos, the Edge browser and in File Explorer.

To complete the process, the recipient must accept an incoming file. Naturally, only users with the latest preview version of the operating system and above will be able to use Near Share.

Also new in build 17035 is the ability to silence tabs in Microsoft Edge. Catching up to its browser rivals Chrome and Firefox, Edge enables users to click on the audio icon that now appears on browser tabs belonging to sites that blast sounds at users, effectively muting them. Alternately, they can right-click on a browser tab and select the Mute Tab option.

Another trick Edge has picked up is the ability to save free ebooks in the EPUB format. The Book pane in Edge also gains a few new context menu options, including the ability to view a given title in the Microsoft Store (formerly Windows Store), pin an ebook to the Start menu and more.

Microsoft’s new Fluent Design System is reaching further into the operating system, this time as far as the operating system’s touch keyboard. Now draped in a virtual acrylic, “material” used in Microsoft’s new design language, the keyboard shows a translucent background across all of its modes, including both the wide and one-handed layouts, plus the handwriting panel for users who prefer stylus input.

Microsoft has also expanded language support for the standard touch keyboard layout to over 190 languages. Although users can now tap away in Danish, Greek, Hebrew, Polish and many other languages, Microsoft is still working on bringing Korean, Japanese as wells as Traditional and Simplified Chinese characters into the fold, said Sarkar.

However, some users won’t get to experience the new features. Due to a bug, PCs with AMD processors won’t be able to upgrade to build 17035. Sarkar assured that Microsoft is looking into flaw and working on a fix.