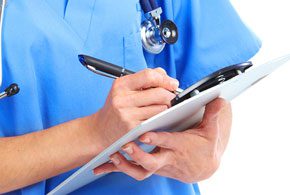 People who visit their doctor regularly know that something is complicating the physician-patient relationship—namely, the office’s electronic medical record system (EMR).

While progress is being made with EMR maturity and usability, physicians spend as much as half of their time typing data into the EMR, according to Nuance research and several other studies. Data entry has the negative side effect of less face-to-face interaction with patients, which results in less effective care and more work for the doctor.

As a result, EMR adoption suffered, and some health care providers took to hiring on more staff, or “scribes,” to sit in on visits and enter data into the system while the doctor talked to the patient.

Nuance Communications thinks it has a better answer. The ubiquitous speech recognition company is shipping its Dragon Medical Virtual Assistant and is starting to work on the next phase of the technology.

At the HIMSS conference in March, Nuance announced that it partnered with EMR leader Epic to integrate the Dragon assistant into several Epic modules, including Epic Haiku for mobile, Cadence for scheduling, and Rover for documentation.

These integrations enable a “command and control” usage model, explained Satish Maripuri, executive vice president and general manager of Nuance’s Healthcare division, in an interview this week with eWEEK. This means that—a la Amazon’s Alexa—doctors can say to a listening device, “Dragon, call up this chart, or Dragon, show me the medication guidelines.”

Nuance wants to go further than that and envisions exam rooms in the near future outfitted with an Amazon Echo-like device, a high-definition monitor and the Dragon Virtual Assistant to help doctors conduct exams. By embedding natural language processing deeper into patient records and workflows, Nuance would enable Dragon to listen to a doctor-patient interaction, record it, and perform tasks on behalf of the doctor as a result of the conversations, Maripuri said.

“This could revolutionize the world of the physician,” Maripuri said. “Dragon is listening, documenting and taking actions, following up on mediation lists and specialists. The virtual assistant will tee all that up for the doctor.”

“Phase two” technologies are in active research and development with health care organization partners and customers, he said, and expects Nuance to release it next year. “Doctors need this right now,” he said. “They can’t wait five years.”

Nuance also is in “active discussions” with at least three other leading EMR vendors to integrate Dragon phase one into their products as well.

In related news, Nuance has agreed to buy NLP vendor Voicebox Technologies, though Nuance officials say that this acquisition will be focused more on the company’s automated and connected car division.

For health care, Nuance is counting on its market penetration in existing voice recognition products to help spur adoption of the Dragon Virtual Assistant into its next phase.

Maripuri said Nuance products transcribe 300 million patient stories every year; two out of three radiologists use Nuance PowerScribe for radiology reporting and about 500,000 doctors speak into Dragon products every day.

The medical profession is still a few years away from seeing if virtual assistants can make a difference for patients and doctors, but it may be worth the wait for health care organizations that are currently losing the productivity battle.

Partners Healthcare, in Boston, is one. It is still working out the kinks of its $1.4 billion installation of an Epic medical record system, according to Dr. Joseph Kvedar, Vice President of Connected Health at Partners HealthCare. At the same time, the organization was forced to hire scribes to help the doctors input data.

“I’m not particularly proud of the fact that it is happening,” Kvedar said in an interview with eWEEK at HIMSS. “There is no other example of someone with that much training and that much economic value that has to do all the data entry themselves. I get that, but it feels very 20th century that we are hiring data clerks and we just put all that money into a system that our doctors can’t use.”