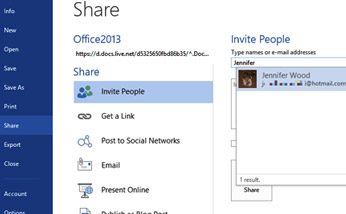 Here we go again. Yet another upgrade to Microsoft Office has reached the market. Microsoft Word is on something like the 12th version, depending on how you count it.

The latest version is Office 2013, and while the previous updates for the past 15 years left me wondering if they were even necessary (I remember Word 95 doing everything I need), this new version is a substantial change with many new features, including an optional subscription plan.

Many of the new features have already been reported on, including here at eWEEK. But one feature that I want to do a full look at is the SkyDrive integration, which allows you to save your documents in a private area on a cloud server and share the documents with others for team collaboration.

Professional writers have used Microsoft Word since its early days in the late 1980s. Editorial teams would collaborate in non-real time using the features that you now find under the Review menu, specifically the track changes and comments features.

I’ve been involved in the book publishing industry for some time, and those features are used all the time as editors and writers pass documents around over email. They have always worked well. Businesses have similarly collaborated by passing documents around, although in experience the track changes feature isn’t used as much as in the publishing world.

Google Docs, on the other hand, has given us real-time collaboration where two people in different locations can be working on the same document simultaneously. My own experience with this feature is that it’s more of a novelty than anything else. On one occasion I worked on a spreadsheet this way with a co-worker, where we discussed what to put it in it while we both viewed the open file at the same time.

However, I have never done this with a word processing document. But the sharing feature in Google Docs has been useful, whereby a single document can be made available for multiple people. In my experience, people would open the documents at different times and not actually work on it simultaneously. I can’t speak for everyone, but that’s been my experience.

So now Microsoft has build collaboration and sharing features into Office 2013 that are similar to those found in other products such as Google Docs. These sets of features work in conjunction with SkyDrive.

When you create a new document in Word 2013, the document opens up as a blank document as usual. But when you save it, you go to the new Save As screen. This screen looks similar to that of the previous version of Word, except by default it points to your SkyDrive folder and it seems as though Microsoft is strongly encouraging you to save your document there. (There’s a setting to change this default, however.)

On the left is a list called “Places,” which includes, in my case, “Jeff Cogswell’s SkyDrive” and “Computer.” Additionally, you’ll find a big plus sign and “Add a place.” Initially the first one, SkyDrive, is highlighted and on the right is a list of recently used folders inside SkyDrive.

Locally, the SkyDrive exists as just a folder on your hard drive where you can store documents and subfolders, just like any other folder.

But the SkyDrive software keeps an eye on that folder and synchronizes it with the same documents and folders on your cloud storage space. When you save your document to a SkyDrive folder or subfolder, Office will upload document to the same relative place in the cloud storage.

This actually works with any software, not just Office. If I open my favorite text editor and save a file in the SkyDrive folder, that file, too, will be uploaded to the cloud area. But Office is totally SkyDrive-aware. In addition to defaulting to a SkyDrive location, Office has various icons and notifications throughout regarding SkyDrive. When I save a document, I see a little progress bar at the bottom appear as my document is being uploaded to the cloud servers.

SkyDrive supports collaboration, and Office is fully integrated with the collaboration feature. When you click the File menu, one of the tabs on the left is called “Share.” From there you can invite people from your contact list (or just type an email address) to share the document and grant them various permissions, specifically Can Edit or Can View.

I used Word 2013 and SkyDrive to write this review. I opened the document both in my local copy of Word, as well as in the online version of Word. Thus I’m collaborating with myself. But it will work the same as if two different people were working on separate computers.

I’ll call my desktop version Person 1 and the online version Person 2. When Person 2 opened the document, I received a notification in the lower-left side that the document was opened. Now as I type as Person 1, I see a dotted vertical line on the left of the paragraphs I’ve changed. This line goes away after I save it.

When Person 1 changes the document, unlike Google Docs, Person 2 doesn’t know about the change right away. When Person 1 saves the document, Person 2 doesn’t immediately see the change, but a “refresh” icon shows up next to the edited paragraph indicating that the paragraph was changed by somebody else and needs to be refreshed. The icon can’t be clicked; instead, Person 2 must re-save the document to load the new changes. (Yes, that’s a bit counterintuitive.) Meanwhile, at the bottom of the screen is the message “Updates available,” which is referring to the document itself, not the software.

After doing so, the changed text is loaded and the document shows a green highlight indicating that the text has changed. The text only remains highlighted, however, until the next save. Remember, this isn’t version control. It doesn’t show a log of the changes over time, only the most recent changes. (However, that’s not to say there isn’t some limited version control. SkyDrive actually keeps 25 copies backed up, so you can go back and recover earlier versions of your documents.)

When Person 2 modifies the document, the same thing happens in reverse. In my case, Person 1 is using the desktop version and Person 2 is using the online version of Word. But they work basically the same way. (As a side note, if you haven’t checked out the online version of Office, you might want to. It has come a long way compared with competing online office tools.)

Because updates happen only during saves, this brings up an interesting question: What if both people modify the same text at the same time?

I wanted to find out what would happen. I typed a paragraph at the end of the document both in the desktop and Web version. I saved both copies, and Word handled it just fine. It just put one sentence after the other as two separate paragraphs.

But what about single word changes? To try that I synchronized both documents and modified the same word in both. I first saved it from the Web version (Person 2). Then in the local version (Person 1). When I tried to save, I received a notification at the top that a conflict exists and the file can’t be saved.

There was also a button labeled Resolve, which I clicked. From there a panel opened that’s similar to the track changes feature, whereby I could choose whether to accept or reject my own change. The change that the other guy made, Person 1, was already in place and apparently couldn’t be rejected. So I chose to accept my change. And both words appeared in the final document. By accepting my change, I was apparently only accepting whether to include it in the document. The other guy saved it first, and his change took effect regardless of what the other person did.

The original word was “modified.” Person 1 changed it to “altered,” and Person 2 changed it to “changed.” The result was that “modified” and “altered” ran together as one word. So I still had to fix it. That’s OK I guess. At least the software made it clear. After all was done, there was a rather casual message: “No more conflicts. You’re good to go.” As eWEEK previously noted, “Word 2013 Gets Colloquial,” in reference to the statement “Typos? Not on our watch.”

As I was wrapping up this article, I started to encounter some problems connecting with SkyDrive. For some reason Word was unable to connect to SkyDrive even though my Internet connection was fine. However, the good news is that I was still able to continue typing, and I could keep saving the file locally on my computer without losing my work. I did encounter this once before, and a few minutes later everything was back to normal.

In general, the whole collaborating experience is pretty smooth and works well. SkyDrive and its collaboration features are fully integrated into Office, and they work great. The online version of Office, while technically not part of Word 2013, also works well together in the whole scheme of things.

Even when problems occur such as a bad connection, the system seems to take care of the situation and keep you from losing files. I plan to continue using Word 2013 and SkyDrive for my professional work.