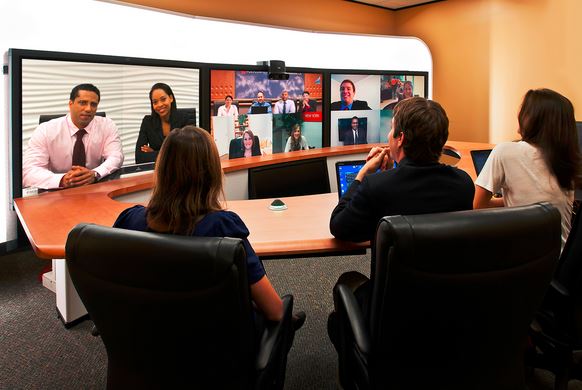 Cisco Systems launched its TelePresence real-time enterprise video conferencing system back in October 2006. I remember that day well; I sat with CEO John Chambers during the demo and was impressed at the technology I was witnessing. After all, there were people in various countries around the world seemingly sitting at one table across from each other, life-size, but on screens.

The high-quality video and audio was something that had to be experienced to be believed. When a man in London in the TelePresence meeting sneezed, I remember automatically turning away slightly, as a person might in such “close quarters.”

These types of near-in person meetings have proved to be valuable for large corporations that can afford to set up an entire TelePresence room with high-end cameras, servers, customized furniture and specialized staff to run it all.

But these rooms are not in the cards for a majority of enterprises, so Polycom came up with an alternative in 2015 and called it RealPresence.

The latest Polycom systems, introduced Jan. 31, are in addition to the RealPresence line and called Polycom Immersive Studio Flex and EagleEye Director. They feature a new customizable TelePresence-type experience and a new camera with advanced video production features, but for much less of an investment, Polycom Senior Product Marketing Manager Brian Phillips told eWEEK.

“We’re bringing by far the best visual and audio experience in TelePresence industry,” Phillips told eWEEK. “It’s an intuitive across-the-table experience; you don’t need training to use it, and the new 3D voice we have added makes the audio so much more lifelike.”

Feels Like You’re in the Room with Others Far Away

When one walks into a Polycom Immersive Studio Flex room, it feels as if he/she is sitting directly across the table from colleagues, whose images are life-size, crystal clear on screens and leave no question as to which direction their voice is emanating.

The Immersive Studio Flex can be customized to space and budget and offers Microsoft Skype for Business functionality at a 37 percent lower cost than other leading solutions, such as the Cisco IX5000, Phillips said.

Like other Polycom systems, the Immersive Studio Flex combines high-definition audio and an 18-foot video wall with three 4K UltraHD display screens, which makes virtual meetings as comfortable as sitting in a home theater and as collaborative as being in the same room, Phillips said.

Also part of the new videoconference packages is Polycom EagleEye Director II camera, which automatically enables closeups of the person talking at the time. The EagleEye has built-in intelligence to recognize from which person the voice is coming and focuses on that person until someone else begins speaking.

Without the need to manually adjust or to use a remote, the camera automatically zooms in on and frames the active speaker from 32 feet in less than three seconds, panning out when the discussion includes more than one person.

A picture-in-picture display of the room means you see the reactions and body language of everyone in the room while you’re focused on the speaker.

The camera runs on the new Polycom Group Series 6.1 release, the engine that drives Polycom’s voice and video technology.

The Immersive Studio Flex and EagleEye Director II, available in select countries starting in February, are the first products to be announced following the company’s acquisition by Siris Capital Group, LLC and transition to a private enterprise.