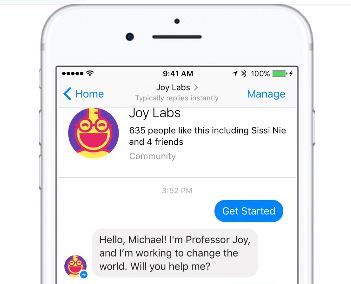 Startup Dexter, which is carving out a name for itself as a provider of a do-it-yourself chatbot management/development platform for brands and agencies, has launched its platform out of closed beta run into general availability.

The company made the announcement at the recent SXSW Interactive 2017 in Austin, Texas. Using the platform, marketers can build branded chatbot experiences across such networks as SMS, Facebook Messenger, Slack and Twitter–without needing coding experience.

Dexter enables users to deploy JavaScript modules written by the Dexter team and other users. If half of the app is already written, Dexter says “to just remix it. For the parts that don’t exist, write your own JavaScript and use Git to add it to your app. Working together, we can automate all the things,” CEO and founder Daniel Ilkovich said.

Dexter manages code execution for users, drawing on the scalability and reliability of Amazon’s Lambda computing service. Based on the triggers users specify, Dexter will invoke an app only when it’s needed. “While it’s in beta, we’ll run whatever you throw at us for free,” Ilkovich said.

Users can engage with Dexter’s internal creative team, Dexter Labs, or try the new build-your-own bot self-serve platform. Throughout the beta phase, brand and agency clients have collaborated with The Lab team on ideation, while Dexter’s creative team handles execution and optimization of the campaign.

Now through the self-serve offering, users get a chance to build a bot from scratch, handling the campaign from start to finish internally.

“Dexter was built as a direct response to listening to input from our most passionate early users – they loved building chatbots,” Ilkovich said. “So, we wanted to extend the ability to create chatbots to all marketers, eliminating the need to know how to code.”

The platform has supported many bots on the platform, including BFF Trump, Boy Bye Bot, and Air Tailor.

In August 2016, Dexter’s team received an infusion of $2.3 million in seed capital led by Rakuten Ventures, with participation from Social Starts and parent company, Betaworks.